Unthinkable: What’s the use of poetry?

Science ‘doesn’t do feelings’ but it should not ignore poetic truths, argues physicist and poet Iggy McGovern 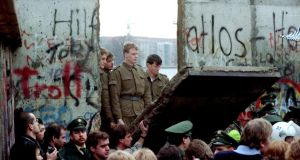 ‘I would like to see the Berlin Wall between science and poetry demolished,’ says physicist and poet Dr Iggy McGovern

About 55,000 students will do the Leaving Cert next month. For many, it’ll be the last time they set eyes on poetry. Do you blame them?

Education is often presented as a zero-sum game, so that more time spent reading Wordsworth means less time for Stem (science, technology, engineering, maths) subjects, which, the argument goes, will get you a job.

Unless you’re actually planning to become an author – and the only money these days seems to be in crime drama or fantasy – knowledge of poetry is practically useless, in the sense that it has no impressionable market value. As the writer Hugo Williams once put it: “To devote a life to poetry looks to most people like a decision to ignore the benefits of modern life, in particular the power of money to effect any meaningful progress. It looks suspiciously like sulking.”

Can you argue with this view? Physicist and poet Dr Iggy McGovern thinks so. He provides today’s idea: “Poetry as an inoculation against rampant emotion is now more necessary than ever.”

What can poetry tell us that science can’t?

“In poetry, these reactions are presented to the reader as somehow tamed, like the performing tigers in the circus, still recognisable but with ‘the fearful symmetry’ held in check; the emotions have been recollected in tranquillity, as Wordsworth has it. And in these more manageable versions they can teach us valuable lessons, so that the next time the heart revolts against the head, the potential damage is better contained.

“Science, on the other hand, doesn’t do feelings. Although, paradoxically, one cannot do science without some degree of emotion, science requires a significant firewall between its logical methods and those same emotions. Moreover, its sphere of operation is so vast it can afford to ignore the smaller terra incognita ruled by emotion, at least until now. However, the onward march of neuroscience may soon change all that.”

What truths are there in poetry, and how do they differ from scientific truths?

“Useful sweeteners include rhythm, rhyme, alliteration etc, even humour. The kernel is never entirely free of its coating, and the truth is never absolute. Scientific truth, on the other hand, is usually presented without any such adornment. Experience has taught science to avoid obscurantism. And yet, this approach has its own problems, not least in the potential loss of audience.”

You’ve explored the varied writings of one of Ireland’s most celebrated scientists, William Rowan Hamilton, inventor of the quaternion number system. Were his poetry and mathematics intertwined?

“But then, in his case the mathematics and the poetry came directly from the same place: his singular mind. He also remarked to Wordsworth that he found himself exercised by both mathematics and poetry at the same time, rather than as alternate efforts. Equally, he shared Wordsworth’s distaste for the other kinds of science, the unpoetic ‘useful knowledge’ that underpinned the engineering marvels of his day.

“The opposite case is pertly made by the 20th-century theoretical physicist Paul Dirac. Dirac chided his fellow physicist Robert Oppenheimer for trying to write poetry and do physics at the same time, claiming they were in opposition: ‘In science you want to say something that nobody knew before, in words that everyone can understand. In poetry you are bound to say something that everybody knows already, in words that nobody can understand!’

“Aside from the rhetorical flourish, Dirac is fundamentally correct: the usage of words is the core difference between science and poetry. In his essay Poetry & Science, the Czech poet and immunologist Miroslav Holub argues that science is based on a single logical meaning of the sentence or word, whereas poetry tries for as many possible meanings and interactions between words and thoughts as it can. He adds that science and poetry do not share words, they polarise them.”

Can poetry flourish in this technological age?

“In the same essay mentioned above, Holub remarks that science and poetry share the same stage, but move in opposite directions – the usage of words dichotomy – however, he is also adamant that they do not aim for opposite ends. Each with its own version of truth is an important defence against ignorance and its attendant social maladies.” ASK A SAGE Question: How do you write poetry?

Thomas Kinsella replies: “Inspiration is the recognition that out of one’s raw material the significant object is presenting itself. You must work your way toward it.”