Unthinkable: Is science being skewed by a gender bias?

The status of women in science is distorting not just academia but knowledge itself, says Helen de Cruz 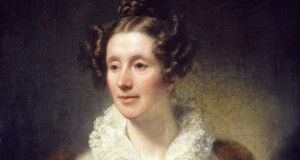 “Many people were so impressed by Mary Somerville it made a difference.” Above, portrait by Thomas Phillips

It has been a sobering time lately for men who are being collectively accused of unconscious gender bias. The representation of women on ballot papers, in theatre programmes and on the airwaves is under scrutiny like never before, and it’s only right that this column join in that process of self-examination.

A count of contributors to the column since it began two years ago shows that only 19 of 79 contributors (24 per cent) were women. A reprehensible total, albeit today at least marks number 20 thanks to Helen de Cruz, assistant professor of philosophy at VU University Amsterdam.

De Cruz, who is addressing the annual conference of the Society for Women in Philosophy Ireland in Dublin at the weekend (www.swip-ireland.com/), points out that biases are “difficult to counteract even if one is aware of them”. In this she references philosopher of science Helen Longino who, through her writings on the way in which knowledge evolves, provides today’s idea: “The greater the number of different points of view included in a community, the more likely its scientific practices will be objective.”

Your lecture at the conference is on “The Under-representation of Women as Science Communicators and its Societal and Epistemic Consequences”. What are those consequences? Helen de Cruz: “Women are seriously under-represented as science communicators. This counts for both the high-profile science communicators such as Neil deGrasse Tyson, Bill Nye “the science guy”, Stephen Hawking and so on as for scientists who want to communicate their own findings, where male scientists do this to a much greater extent than female scientists, even if you take into account seniority and position.

“When it turned out that the person behind ‘I fucking love science’ was a woman (Elise Andrew), there were lots of sexist comments, such as ‘You mean you’re a girl, AND you’re beautiful? Wow, I just liked science a lil bit more today’.

“For most people, the media - TV, internet and so on – are the only place where they hear about scientific findings. If the communicators of such findings are men, we’re likely ending up with a biased picture of science.

“These are the epistemic consequences, which have to do with what we can know. When women do not communicate their findings, their voices are effectively silenced.

“As for societal consequences, when science communicators are men it reinforces the impression that science is not for women or girls. This is illustrated by Mary Somerville, a prominent science populariser in the 19th century. Many people were so impressed by her it made a real difference. For instance, Somerville College, the second women’s college in Oxford, was named after her to allow women to have an Oxford education.”

“When anthropologists were primarily men, for instance, they did not have adequate access to the social sphere of women. Once women entered the anthropology scene, anthropologists got a much better picture of such things as childcare, marriage, taboos associated with menstruation and so forth.

“Another is that lots of research is focused on male-female differences. It’s an easy variable, and people come with preconceptions about what girls and boys or men and women are like. For instance, women in western countries lag somewhat behind in math achievement, and are seriously under-represented in Stem (science, technology, engineering, maths).”

“Evolutionary psychologists attempt to provide explanations for this difference in intrinsic biological differences, such as that male brains are more apt at mathematical tasks. However, it turns out the gender gap in maths and Stem in non-western cultures, such as in Japan, is a lot smaller, indicating social factors may be at work.”

An empirical study you co-authored found that gender was one of the factors that correlated with the perceived strength of religious arguments. Does this suggest that men and women think differently about faith and other philosophical matters? “Philosophy has a low representation of women compared to other disciplines in the humanities, with about 20-30 per cent of faculty members being women, depending on country. Buckwalter and Stich argue this is because women have different philosophical intuitions. There’s been some experimental studies to test if this is really the case.

“To be fair, we do find some effects, including some significant ones, but it’s unclear whether these track deep, stable differences in how women and women think about philosophy. There may be a lot of false positives. Recently, it’s come out that only about one in three famous psychology studies could be replicated.

“Testing for gender is easy. Even if you control for multiple tests, there may be false positives. In the light of this, I’m cautious about making any general statements about the gender effects we found in the study. For one thing, the effect sizes (magnitude of difference between two groups) was a lot smaller for gender than for, say, how theists or atheists felt about the arguments.”

“If we have a diverse community of people in science, the biases can mitigate each other. The same is true for the public communication of scientific findings. If we have science communicators from a wide range of backgrounds, we’re more likely to see biases in their reporting cancel each other out.” ASK A SAGE Question: What’s the toughest scientific discipline?

Mary Somerville replies: “No analysis is so difficult as that of one’s own mind.”