Publication aims to celebrate all things successful about Traveller community 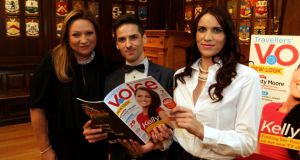 At the launch of Travellers’ Voice magazine at the Mansion House, Dublin were businesswoman and Dragons’ Den mentor Norah Casey (left) with the magazine’s editor Michael Power and Tracie Joyce, regional reporter on the publication. Photograph: Nick Bradshaw

A newsletter for the Traveller community was relaunched as the high gloss ‘Travellers’ Voice’ magazine in the Oak Room of Dublin’s Mansion House last night.

Designed by publishing entrepreneur and ‘Dragon’s Den’ star Norah Casey (left) with the aid of new editor Michael Power (centre), the magazine aims to celebrate all things successful about the Traveller community. On the front cover of the new edition is a striking picture of Traveller and singer Kelly Morgan who is interviewed by Traveller and journalist Tracey Joyce (right). Readers will also start to see Joyce’s work in ‘The Irish Times’ in coming months.

The magazine also features a spread on the upcoming RTÉ television series ‘Norah’s Traveller Academy’ – a group of Traveller businesswomen mentored by Casey.

With sections on Traveller pride, fashion, motors, food, beauty and health, the magazine also features Our Voices, a section where Travellers who are making their mark in their chosen field seek to eradicate misconceptions about their community. “We hope to have a member of An Garda in this section soon,” said Power, “it will really challenge people’s preconceptions”.

‘Travellers’ Voice – the other side of the story’ is available from newsagents.