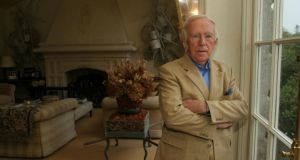 A hit with the ladies: the late Tony Ryan. Photograph: Aidan Crawley

Stories of Tony Ryan’s tough management style are legendary, and they come thick and fast in Ryan: A Legacy (RTÉ One, Tuesday), David Murphy’s insightful and engaging documentary about the late aviation entrepreneur. We tend not to celebrate businesspeople in this country, as our default attitude towards them is a chippy suspicion. But this film is a celebration of an extraordinary life well lived.

The interviews with Ryan’s staff at Guinness Peat Aviation, his leasing company, are revealing, telling how otherwise confident men cowered at meetings, afraid that their boss would brutally identify and publicly expose some enormous shortcoming. Hilarious anecdotes include one from Vincent Browne from his time as editor of the Sunday Tribune when the paper was under Ryan’s ownership.

During a fractious meeting, as Browne stomped towards the door, Ryan raised his fists and took a swing, only to hit the man sitting nearest: the elderly Nobel peace laureate Seán MacBride, who promptly hit the floor.

Murphy is RTÉ’s business editor, so Ryan’s career, beginning at Aer Lingus, as a clerk, is vividly detailed. But the film succeeds for a wider audience by also giving a personal portrait of the Tipperary man, with just enough detail about Ryan’s family, including his former wife and some of his subsequent partners. (He was quite a hit with the ladies.)

Ryan is credited with inventing aircraft leasing; it changed the business model of global aviation and gave Ireland a thriving new business. That’s one of his legacies, as is Ryanair, the low-cost airline that has probably done more to encourage the free movement of people throughout Europe than anything Brussels has come up with.

Much of the business story was covered in last year’s Pioneers & Aviators, but this has the two key figures missing from that Alan Gilensan documentary, Denis O’Brien and Michael O’Leary. Both were at one time Ryan’s PA – hard to imagine either in such a role – and they tell affectionate, very personal yarns. O’Leary also gives an entertaining overview of the early days of Ryanair, when his cheap-as-chips, shout-it-loud approach conflicted with his employer’s more refined tastes.

The film begins with Ryan’s childhood home, a tiny two-bedroom cottage, and ends with him at his magnificent Lyons estate, in Co Kildare, a monument to his aesthetic values and vast wealth. Murphy charts that journey with finesse.

Black Work (UTV Ireland, Sunday), a new three-part crime drama, is good, in no small part thanks to a top cast. It’s tricky to discuss, however, because the plot heads off in unexpected directions, and to talk much about the opening episode risks spoilers.

The strong basic premise is that mother-of-two Jo Gillespie (Sheridan Smith) is told that her husband has been killed. They are both police, based at the same station, but it’s news to Jo that he has been working undercover for the past three years in a criminal gang. Suspecting a cover-up, she sets out to find the killer. A tiny voice in the back of your head may wonder whether, if Jo is such a smart detective, she shouldn’t have copped long ago that her husband was living a double life. Leaving that aside, it’s very watchable, and the quick turns in the plot get the tension going.

Bankers at the branches

There are 30 in the Huddersfield outlet – and, after 2008, they know how people feel about them. “I think we’re just one above estate agents,” says one. “I know what it feels like to be hated. It’s not nice,” says another.

Many customers are narky, but all sorts come through the door. Customer service is the new target metric: before the bust, bonuses were based on how much you were able persuade consumers to borrow; now the branch has head-office targets to do with customer feedback.

The star of the show is Claire, the branch’s acting manager. “How much do you earn?” asks the director, and he starts to guess: “£100,000?” It’s such a fantasy figure that Claire, with her jaunty scarf – for some reason the employees dress like cabin crew – doesn’t even answer. He goes down in £10,000 steps. She nods when he gets to £20,000 a year. “A little more and that’s about right.”

The staff are under huge pressure from head office. If the Huddersfield branch can bring its customer-service rating above 60 per cent, the bonus – and we’ve all heard of bankers’ bonuses – “is around 50 quid”. It’s a different view of banking.

This season we’re in a gritty Los Angeles. We’ve seen the location in any number of noir dramas, and TV and film nods pile up, from CHiPs to Chinatown to Crash. With the first series of True Detective I got bored and bailed just after midway. That’s TV reviewer heresy, probably, but there’s only so much self-reverential Gothic melodrama I can take.

This one I’ll stick with: there’s a murder to be solved, and the victim is the city’s corrupt planning guy. So it’s a recognisable, albeit self-conscious police procedural in classy noir clothing. Farrell and McAdams are knockouts, and the landscape, both emotional and physical, is intriguing. These are reason enough to stick around.

Ones to Watch: Knocked-up talent and a knockout Smile

The critic Cyril Connolly is famous for one infamous phrase: “There is no more sombre enemy of good art than the pram in the hall.” Was he wrong? In Artsnight (Friday, BBC Two) Lily Cole (right), the pregnant model and actor, explores this time-worn topic.

Behind a Smile (RTÉ One, Wednesday) is a documentary following Dr David Orr, a dedicated Irish volunteer surgeon, as he works with the charity Operation Smile to provide surgery for Ethiopian children born with cleft conditions.

Dying for an iPhone: Inside the factories that produce Apple’s bestselling product
Real news has value SUBSCRIBE