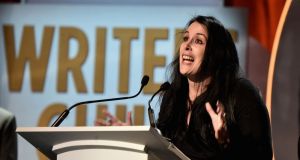 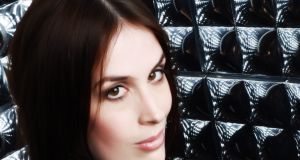 Rhianna Pratchett on Lara Croft: “Sexiness and sex appeal can be a part, but it’s important to think about the characters as human beings”

Waiting outside the station in London’s leafy Highbury to meet Rhianna Pratchett, I get a text: “I’m wearing a black T-shirt with Lara Croft’s climbing axe on it” – a suitable choice of garment for the games writer who helped reinvent the world-famous Tomb Raider heroine in 2013.

Pratchett (40) arrives, dressed in black from head to toe, and suggests we find somewhere to talk in the nearest park. Stopping at an ice cream van, she orders what the seven-year-old kid in front of her is having: an electric blue scoop of bubblegum ice cream, dipped in sprinkles, with chocolate sauce.

Two minutes later, sitting on a park bench, Pratchett tips the entire thing on to herself. “It looks like I killed a Smurf,” she says, trying to mop up the mess.

To anyone who doesn’t believe video games need professional writers, Pratchett has heard it all before. When she started out in the business, she says the question was often asked. Her exasperated reply: “Well, you’ve got professional artists, why would you want a game not done by a professional?”

Slightly begrudgingly, Pratchett says, the games industry now hires actual writers in to help flesh out their stories and make their characters more believable. In the past, story took a back seat.

“They were written by developers, producers or whoever had the time or inclination to write the words,” Pratchett says. But things are changing, and her reimagined Lara Croft is a prime example of a sympathetic character in gaming: human, relatable and likeable as well as ass kicking.

Games were Pratchett’s first love. So, after studying journalism (“I didn’t know what I should to do with myself, and journalism is really good for anyone who likes to write a bit and is nosey”), she went into games reviewing. Landing an interview for a job with PC Zone, she “babbled at length” about her disappointment at its review score for the action role-playing “hack and slash” video game Diablo II.

Pratchett got the job and spent the next few years “bouncing around the world interviewing developers, reviewing and previewing games and attending games conferences”.

She writes just about everything, that is, except novels.

“Pratchett Senior kinda had that sewn up,” she laughs. “It’s very hard to go into the same field as a very successful parent.” This is particularly true when that parent has sold more than 85 million books and been published in 37 languages.

For anyone tempted to be even remotely sniffy about a career in gaming, chew on this. In 2015, revenue for the US games industry hit $23.5 billion (€21 billion), according to the Entertainment Software Association, and the global games market is expected to grow from $91.8 billion to a $118.6 billion by 2019.

It is also a highly creative industry that attracts top talent, from actors and musicians to artists and developers, and is recognised by Bafta. There’s more to it than Grand Theft Auto.

Still, despite the creativity, the mega sales and popularity, gaming is still misunderstood and blamed for everything from sexism and violence to teenage delinquency.

“Games have always been a bit of a bogeyman”, she says. “The same way rock’n’roll or the novel was. When the novel first came to this country people said women would lie around on sofas reading novels all day and the country would go to rack and ruin.

“Every young generation has to have something the older generation don’t really get and fear, and video games have been like that for a long time.”

Some of the problems are real though. What about the sexualisation of female characters in Overwatch, Street Fighter and Metal Gear Solid (to give just three examples)? Or the online bullying of female gamers (who make up half the total audience for computer and video games), which came to a head with the so-called Gamergate controversy over sexism and harassment in the industry?

“There are a few issues the industry is dealing with, but I’m very proud of how far it has come over the last decade,” Pratchett says, diplomatically. She points out that gaming is still the new kid on the block compared with films and TV. And, in an article titled “Let’s talk about sexualisation in video games” for the gaming magazine and website Develop, she argued that context is key.

By and large, Pratchett says, the industry is working through its problems, and concentrating on writing better characters is one way to help. “Sexiness and sex appeal can totally be a part, but it’s important to think about the characters as human beings.”

For her, though, the “most important thing is encouraging young women into the industry”.

To this end, Pratchett speaks on panels and at girls’ schools, hoping to educate the next generation about the opportunities for women in gaming.

Before Gamergate, the Twitter hashtag #OneReasonWhy was created, largely for women to share stories of sexism they had encountered in the business. Pratchett, who has 42,000 followers, created another hashtag, #OneReasonToBe, to talk about the positives.

“I don’t want young women to look at it and think that’s all there is,” she says. “It’s important to shine a light into the dark corners and show there is a fight going on, but it’s equally important to show what’s worth fighting for.”

Not just toys for boys

Dad Terry was a big fan of games. She would sit beside him and draw intricate maps on graph paper to accompany the “old isometric games he was playing that didn’t come with a map in the box” .

“I was a dabbler,” she says. She played four different musical instruments (“none very well”), took martial arts and climbed trees but still liked her doll’s house.

At 16 she moved away to a private girl’s boarding school. “I don’t know how I survived that. Looking back, I think as an only child you get very good at dealing with any situation you are thrown into.”

She was forced to do sport and discovered she liked the more “romantic ones” – horseriding, fencing, archery.

“I had bad teeth and glasses and straggly long hair, so yeah, I was a bit of a bullying target. I was always last to be picked, which my dad was too. So I think a lot of good people get picked last for sports teams. I think that, along with any teacher saying ‘you’ll never amount to anything’, is a good indication of future success.”

Her father had great success with Mort, the fourth novel in the Discworld series, which was published in 1987. It signalled the end of Terry Pratchett’s life as a journalist and the beginning of his career as a prolific, world-renowned writer.

At 18, Rhianna moved to London; her father travelled a lot and she saw him less. Still, she’s had a good relationship with both her “pretty amazing” parents.

“For a long time, I didn’t have anything to do with dad’s work,” she says. “I went to the odd convention, but I wanted to forge my own path. I kept away from Discworld for as long as possible.” It was only when her father’s Alzheimer’s got worse that she thought “there should be another Pratchett involved”.

In 2012, she helped set up a production company, Narrativia, to protect her father’s work. Because she is a writer, she says she earned her place at the table and wasn’t just there “because I was Terry Pratchett’s daughter”.

She is adamant that after The Shepherd’s Crown, which was published shortly after Pratchett’s death, there will be no more posthumous works. “I feel the novels are sacred to him, and no one could ever write them like him, and no one should try.”

When her father was very ill, she read to him to help him sleep. On one Father’s Day, she presented him with the first draft of her adaptation of his novel The Wee Free Men and read it aloud to both parents.

Did he ever offer her writing tips?

“Use adjectives as if you have to pay five pounds every time you use them,” she laughs. “He wasn’t really a dispenser of storytelling wisdom, but I didn’t go looking for it either. We both thought it would be best if I found out for myself.”

Rhianna Pratchett is in conversation with Maura McHugh at the Hay Festival Kells in Co Meath on Saturday, June 25th, at 5pm. hayfestival.com/kells