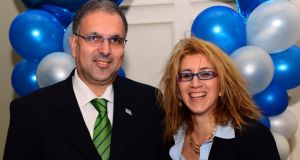 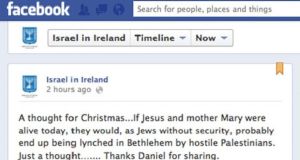 ‘Somebody on the Israeli foreign-ministry staff in Ireland has a lot of explaining to do,” began the report in the Jewish Press, in August. The article went on to explain how followers of the Twitter account of the Israeli embassy in Dublin had been upset by a tweet: “It’s from 2011: The UN has itself become a tool against Israel. Hitler couldn’t have been made happier”.

The tweet was quoting Simon Deng, a South Sudan refugee, and contained a link to a speech Deng made protesting the Durban II conference. The event, sponsored by the United Nations, was boycotted by the United States and Israel, because of criticisms of Israel at a previous conference.

The tweet was deleted hours later, after complaints. Several Israeli media outlets reported on the episode. A headline in the Haaretz newspaper read: “Israel’s Ireland embassy: Hitler would have liked the UN.”

Officials at the Israeli foreign ministry played it down. “The controversial quote was taken from the words of a Sudanese refugee, as is clearly seen in the article linked in the tweet,” a spokesman told the Times of Israel. “It should not be attributed to the embassy, but in the face of the growing misunderstanding it was decided to remove the tweet.”

The “tweet and delete incident” was not the first time the digital-diplomacy output of Israel’s embassy in Dublin has drawn controversy. Last December, the embassy posted an image of Jesus and Mary on its Facebook page, accompanied by the following text: “A thought for Christmas . . . If Jesus and mother Mary were alive today, they would, as Jews without security, probably end up being lynched in Bethlehem by hostile Palestinians. Just a thought . . .”

The post was deleted within hours, but not before it had gone viral on social media and attracted international media attention. The embassy’s subsequent apology, published on Facebook, read: “To whom it may concern: An image of Jesus and Mary with a derogatory comment about Palestinians was posted without the consent of the administrator of the Facebook page. We have removed the post in question immediately. Apologies to anyone who may have been offended. Merry Christmas!”

Later that day, after journalists discovered other potentially objectionable material, the Facebook account vanished. The embassy’s press officer told the New York Times the page had been taken down for maintenance. The page later reappeared but with several posts removed.


Embarrassing provocations
Haaretz’s diplomatic correspondent, Barak Ravid, was scathing in his report on the incident. “Israel’s embassy in Dublin has been in the headlines many times over the last few years, not only because of the tense relations between Jerusalem and Dublin, but also because of embarrassing provocations by Israel’s envoys at the mission, who try to think creatively when it comes to public relations (hasbara),” he wrote. “The person who leads this provocative line in the embassy in Dublin is not only Ambassador Boaz Modai, but also his wife, Nurit Tinari Modai, who serves as deputy head of mission.”

That summer Tinari Modai, in a letter to the Israeli foreign ministry, had proposed a strategy to “humiliate and shame” pro-Palestinian Israeli activists in Ireland, claiming their activism was rooted in psychological problems. In the letter, leaked to Israel’s Channel 10, Tinari Modai, who also serves as the embassy’s cultural attache, suggested publishing photographs of the activists to “cause embarrassment for their friends in Israel and their family” and sow suspicion among non-Israeli activists that “they may actually be working on behalf of Mossad”, a reference to the Israeli intelligence services.

She added: “The activity of those activists against the state is, in my evaluation, not necessarily ideological (!) but grounded in psychological reasons, (generally of disappointment with the parents, sexual identity problems) or the need to obtain a residency visa in one of the countries in Europe.”

It is not clear who was behind the social- media posts removed after making international headlines, but sources at the embassy have acknowledged in the past that Tinari Modai sometimes posts on its Facebook page. Posts on the page have claimed that “Pro Palestinianism is often just a politically correct cover for anti-semitism” and called the Irish Government “naive” for supporting Palestine’s upgraded status at the UN.

One post criticised what it claimed was “the Irish biased one-sided media”, which worked “in favour of the Palestinian Industry of Lies and against Israel”. An accompanying video features a satirical TV news report starring an Israeli actor in a red wig and tweed cap playing the part of an Irish journalist who admits to fabricating footage to favour the Palestinians.


Hostile
The embassy’s provocative approach has raised eyebrows among other foreign diplomats in Dublin, who question such tactics in a country regularly described by Israeli officials and media as “one of the most hostile” in the EU. In an interview with the Jewish Chronicle, in March 2012, Tinari Modai referred to Ireland as “a huge challenge, maybe the biggest in Europe”.

In his report on the embassy’s Christmas posting last year, the Washington Post journalist Max Fisher wrote: “International diplomacy requires restraint and calculation. Neither is particularly well served by incendiary, racially tinged messages like those on [the embassy’s] Facebook page.”

As one diplomat in Ireland put it: “This is hardly the way to win friends and influence people, particularly in a country where you know you already have an image problem.”

Barak Ravid of Haaretz says it was clear from the beginning of Modai’s and Tinari Modai’s tenure as ambassador and deputy that they had adopted a “zero tolerance” policy towards criticism of Israel. “There is a difference, however, between a robust public-diplomacy campaign and an offensive one,” he added.

Last December, a spokesman for the Israeli foreign ministry promised an internal investigation to determine how the post about Jesus and Mary could have been uploaded, saying it would “make sure something like this does not happen again”. A spokeswoman declined to comment this week on whether an inquiry had taken place. She said the ministry was “very appreciative” of the work of the ambassador and his wife and had requested they stay in Ireland for a fifth year, to “continue their fruitful and important work”. She added: “the social-media activity of our embassy is very popular and has a lot of followers.”

Both Modai and Tinari Modai declined to be interviewed for this article. The embassy’s press officer, Derek O’Flynn, after arguing that the issue was a “nonstory” and “making a mountain out of molehill”, said the embassy would not be commenting beyond saying it was “dedicated to promoting diplomatic relations, cultural and economic links, and friendship between Israel and Ireland”.