He may be nonplussed by the fuss over 1977’s ‘Marquee Moon’, but he is happy new generations remain receptive 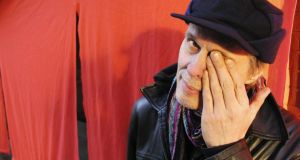 Odd guy, Tom Verlaine. He is the JD Salinger of US punk, the kind of considered type that browses uninterrupted through Greenwich Village bookstores on a Sunday afternoon for something nice and obscure. You can’t quite put your finger on it, and you can’t quite put a name to him, but he’s a man with a face you know you’ve seen several times before in the pages of now-defunct music papers.

One could not accuse Verlaine (born Thomas Miller in New Jersey, 1949) of flooding the marketplace with his music. We know of his work with Television, but since they first split up almost 40 years ago, Verlaine has kept himself pretty much to himself. He has, you sense, a loose sense of momentum, but by his own admission he is one of rock’s least egotistical characters. He dislikes the use of the word “recluse”, but admits that he’s not the biggest party guy in the world. (“I’m not crazy about dance clubs, either.”) He dislikes, also, being described as reflective – “because it sounds monk-like, which I don’t feel to be. I get around in my own way.”

Verlaine will always have people asking him about his work with Television, the New York band of the mid-to-late 1970s that sparked like a firecracker and then sputtered out within a few years, leaving a classic rock album (1977’s Marquee Moon) and a comparatively poor follow-up (1978’s Adventure) in its wake. The band was revived more than 20 years ago, and since then Verlaine has engaged in sporadic touring and irregular bouts of band songwriting. “We average one new song every 18 months,” he says blithely, “so we’re not exactly prolific, but it works that way for us.”

From such a distance, does it seem to him that Marquee Moon is the classic everyone says it is? Reluctantly, Verlaine replies that “it’s basically a live record with the mistakes patched up and with some editing here and there. I never think of it in any context in particular. It seems to get rediscovered by a new generation every 10 years or so, which is kinda cool.

“The people that have mentioned it to me in the past 20 years or so have been young enough to be my children, which is interesting, but I don’t want to really talk about that record any more. I don’t know why people have such an interest in it. I just don’t get it. So much has been mentioned about that album there’s probably not much more that can be said.”

Verlaine says this without rancour, but there’s a hint of weariness. He’s fully aware that a work of art (which Marquee Moon certainly is) can often, unwittingly or not, become a yoke around the neck. And yet here he is again: touring Television and playing tracks off Marquee Moon, which, whether he likes it or not, will fill larger venues than Verlaine as a solo act.

Stay tuned, Television fans
Despite his lack of enthusiasm for commercial prospects, there are, he says, several plus points awaiting the thirsty Television fan. These include the inclusion live of unrecorded songs, actual new recordings – “we’ve got about 12 tracks recorded for a new release, but we’re not sure when they will be really finished. We also worked out three more new songs for a recent tour of Japan” – and, aptly enough in the light of the previous comment, a renewed commitment to playing live.

“Japan is my favourite place to play at the moment,” says Verlaine with real enthusiasm. “No one videos the shows on their cell phones; they just like to listen, so they’re very good audiences to play to, and to improvise to. Recently, we played some small, seated venues there. It was all very non-rock. I could actually hear my voice on stage.”

Alongside queries about Marquee Moon, does he also tire of answering questions about the mid-to-late 1970s punk rock heyday of New York City?

“To be honest, there’s not a lot of memories about that time, and I never run into any of the people that played there. That said, I do still see Patti Smith a few times a year – in fact, recently I did a mostly poetry show with her; there were no drums, just her voice, guitar and her daughter on keyboards. It was very cool and great fun.”

We can detect dangerous levels of lethargy travelling across the ether, but we’d still like to ask about how, when he journeyed from Wilmington, Delaware, to New York in 1968, he changed his surname from Miller to Verlaine, and how, some year later, he developed into a rock music lyricist of elegance and worth. Finally, a question that draws more than a few words in reply.

“Growing up in Delaware,” he says, “I had minimal exposure to literature. When I came to NYC in 1968 I got a job in a giant used bookstore. The salty older guys working there, many of whom were writers, would toss books at me saying, ‘Here, kid, read this.’ I remember reading The Colossus of Maroussi, Henry Miller’s book about his time in Greece, and some very good translations of the poets Federico García Lorca and Antonio Machado.

“The writer I liked the most back then, however, was Gérard de Nerval, a French poet and essayist. Maybe because I could sympathise with his unrequited love- madness – for lack of a better term – and how he was able to write through that or accompanied by that.”

And that’s it. He’s off the promotional duty hook. Verlaine breathes an audible sigh of relief. Where is he off to now?

Dr James Barry: the Irishwoman who fooled the British Empire
6