It was a year of blockbusters, but 2015 was also distinguished by eccentric, smaller films that pushed various whacky agendas. Our list tends towards the latter... 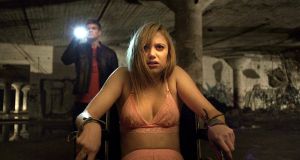 Maika Monroe in David Robert Mitchell’s It Follows: "An unexpectedly beautiful and nostalgic tribute to an era when teenage complications were no less severe, but were simply different in tone"

CATCH ME DADDY
Astonishingly unsettling thriller set among the Pakistani community in Yorkshire. A sort of rainy western, Daniel Wolfe’s picture is distinguished by stirring cultural bravery and by delicious spooky cinematography from our own Robbie Ryan.
Full Review

MOMMY
The depressingly young Xavier Dolan – French-Canadian conjuror – has been threatening to push above ground for a few years. His singular tale of a warring mother and son, shot in a rare narrow aspect ratio, delivered in moving style.
Full Review

THE TRIBE
The concept alone would set it apart. Myroslav Slaboshpytskiy’s film, set in a Ukrainian school for the deaf, is played put in sign language with no subtitles. Gratifyingly, the finished product was as gripping as any mainstream thriller.
Full Review

INSIDE OUT
Can we avoid the phrase “return to form”? It seems not. Pixar moved on from disappointing sequels to an original (in several senses) comedy set within the head of a displaced young girl. It will be with us forever.
Full Review

A PIGEON SAT ON A BRANCH REFLECTING ON EXISTENCE
We’ve used up half our word count just typing the title. Roy Andersson, Swedish absurdist of note, returns with a characteristically barmy satire that generates laughs and outrage.
Full Review

TANGERINE
Sean S Baker used iPhones to shoot his fiercely energetic story of transsexual sex workers on the streets of West Hollywood. The result is funny, intimate and strangely beautiful. Much more than a technological novelty.
Full Review

A GIRL WALKS HOME ALONE AT NIGHT
More weirdness. Ana Lily Amirpour’s unclassifiable oddity concerns a female vampire set adrift in a city that is not quite in Iran and not quite in the American outlands. To be puzzled over and treasured.
Full Review

IT FOLLOWS
David Robert Mitchell’s horror film carves out an original class of macabre: a curse is passed on through sexual intercourse. But, set in a present coloured by the Carpenterian 1970s, the picture is also alive with influence.
Full Review

THE DUKE OF BURGUNDY
Peter Strickland, director of Berberian Sound Studio, confirms his position as the wizard of retro-bizarre. His latest follows a sado-masochistic lesbian romance in Ruritania.
Full Review

What are your top movies of 2015? Cast your vote in The Ticket Awards now

What do you think were the best movie and music moments of 2015? Have your say and be in with a chance to win