The Barber of Seville review: Rossini gets a rock makeover 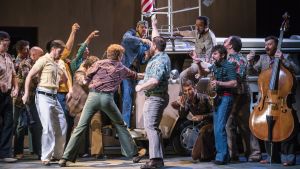 Gioachino Rossini’s The Barber of Seville (Il barbiere di Siviglia) is a young person’s opera. It’s a story in which young love triumphs, as wily heroine Rosina wins out against the efforts of her greedy ward, Dr Bartolo, who wants to marry her for her inheritance. At the time of its disastrous first night in Rome in February 1816, its composer was just a week shy of his 24th birthday.

Director Michael Barker-Caven’s new Wide Open Opera production, with a highly mobile set by Jamie Vartan, updates the setting to the 20th century and the years when the LP reigned and Spain was ruled by General Franco.

Barker-Caven’s Dr Bartolo is a music mogul of some kind and Rosina is his latest find. This allows for a nice transformation of the opera’s singing lesson into a session in a recording studio with a wall lined with platinum discs.

The record-industry background brings with it the full complement of vanity and greed and a perfect excuse for the presence of some bouncer-type heavies. Figaro, the barber himself, who travels in a Volkswagen hippie van, is no mean stud when it comes to gyrating suggestively with an electric guitar.

What makes the production work so well is that all the characters are carefully drawn. The scheming shows real strengths on both sides, and the outcome is not to be taken as a foregone conclusion.

Musically, the pacing by conductor Fergus Sheil gives everyone space in which to work. There’s plenty of room for the busy stage action that Rossini’s music demands, but it’s achieved without that sense of hurry that so often makes operatic comedy tumble over itself with an excess of eagerness. The benefits for the singing are even greater, the sense of space allowing vocal detail to register.

Tara Erraught is already a Rossinian of note. This is her 25th performance as Rosina, following stints at the Vienna state opera, the Hamburg state opera and the Bavarian state opera.

She brings to the role a full command of what you might call its vocal bling, those showy, acrobatic lines that she knows how to deliver with an effortless insouciance. She can also tug at the heartstrings.

Gavan Ring’s Figaro is also commanding and he is resourceful, witty and quick, while Graeme Danby’s Bartolo presents himself as a worthy opponent rather than a feeble foil.

Of course, there’s still no reason to doubt Rosina’s preference for the energetic and passionate Almaviva of Tyler Nelson. John Molloy shows his familiar comic skills as Don Basilio, and Mary O’Sullivan scales impressive vocal heights as Berta. It’s a night to remember.