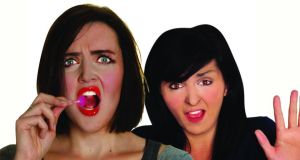 Though clearly taking its cue from the case of Michaella McCollum, the Irish woman convicted of drug smuggling in Peru, Tracy Martin’s drama is less topical piece than character study, albeit with a narcotic-flavoured twist.

Following the death of her mother, shy Ali (Andrea Cleary) strikes up an unlikely friendship with the hedonistic, recently single Lisa (Aoibheann McCann).

Drawn together for differing personal reasons, the pair seal their companionship with drugs, but as their personalities change, their relationship reverses. Neither the subject matter nor the staging are particularly new – catalogues of drug consumption and streams of profanities are now about as groundbreaking as Restoration drama – but under Martin’s directorial hand, the dialogue is sparky, while the cast imbue their main characters with depth, pleasing ambivalence and, despite the downbeat narrative arc, unexpected sweetness.