Prime Cut’s new staging of a Chilean double-header finds one post-conflict society exploring the memories of another. Are they simpatico? 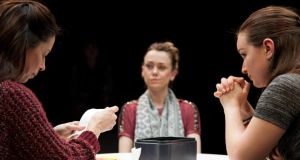 In ‘Villa’, Pauline Hutton, Bernadette Brown and Amy Molloy have a debate coursing with agendas, bitterness and distrust

The staging is deceptively simple – we sit in a small, grey circular arena designed by Ciaran Bagnall – yet it announces the first subtle contradiction in Prime Cut’s new season of Chilean political theatre: you have to look inwards to see outwards. As three young women with Northern Irish voices deliberate on the future of Chile’s Villa Grimaldi, the largest rape and torture centre of the Pinochet regime, the echoes sound gently: how does a society emerging from conflict choose to remember the past? Can you look back while moving forward?

Initially there are two options: to reconstruct the Villa, as a testimony to erased atrocities, or to create a muted museum on the site. But Guillermo Calderón’s acrid satire (translated by William Gregory) splinters those choices into absurd, grotesque and almost plausible options. The recreation warps into a House of Horrors theme park; high-tech and conceptual-art exhibits suggest “a museum of painful memories . . . but a nice one”.

It is, director Róisín McBrinn recognises, a debate coursing with agendas, bitterness and distrust: lips pursed and frowning, Pauline Hutton, Bernadette Brown and Amy Molloy play women pursuing arguments they may not believe, while each vote is either spoiled or manipulated. Like the performer’s motion, choreographed by Emma O’Kane, the arguments go round and round, a spiral both amusing and frustrating.

Calderón is representing process, not solution, however, in all its illuminating and wearying stages. And the circularity doesn’t end there: art’s role in remembering, aestheticising and distorting is foregrounded. When Brown throws a loose finger in our direction, it feels like a sardonic self-critique. If there is a breakthrough, it comes with fewer abstractions and more personal testimony. It’s not exactly a resolution, but nor should it be. In the end, it’s endless.

It’s hard to imagine anyone but Eleanor Methven playing Calderón’s version of Chilean president Michelle Bachelet in Discurso. Delivering an imagined farewell that goes wildly off-script (part apologia, part candid concession), the role requires an intricate weave of public and private personas, slipping between trauma and optimism, ideology and sensuality, pragmatism and rage. But something is amiss. “I’m not myself,” the president says, sloping from a lectern to the audience. “It feels like someone is putting words in my mouth.”

Calderón can labour that self-reflexivity, and McBrinn and Methven work hard to chart a fluid, engaging course through an almost rambling meditation, but there is a deeper dimension to this public representative: she actually represents the public. “I’m different,” she says. “We’re different.”

For all the distance left for a post-conflict society to travel, here and elsewhere, that begins to feel like a real achievement. Until June 14

The books quiz: Zadie Smith is married to which Irish writer?
6

Patrick Freyne: You endearingly sentimental sociopath, I’ve just the show for you!
8

Have arts and culture been demoted again?
Real news has value SUBSCRIBE