Review: The Seagull and Other Birds

Pan Pan Theatre makes Chekhov’s play the centrepiece of its crammed and elusive aviary. Are they able to wing it? 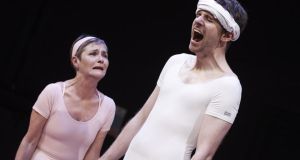 The Seagull and Other Birds

What if everything really has been done before? A young radical dismisses “modern theatre” as a dull collection of stereotypes, agitating instead for “new artistic forms” or nothing at all. The result, the play within the play in The Seagull, is a mess; as poorly received on its first performance, in fact, as Chekhov’s play itself. The history of artistic movements is one of rupture and resistance, of initially incomprehensible experiments and slowly broken paths. What is our modern theatre to do?

Pan Pan Theatre, easily Ireland’s most searching contemporary theatre company, makes Chekhov’s play the main attraction within a crammed, noisy aviary: the “other birds” here are short new texts, largely written by the cast, so that an already self-reflexive drama, given a face-front post-dramatic staging, spreads prolifically with plays within the play.

The goofily amusing sight of director Gavin Quinn, his cast and crew, snug in leotards and tutus, assuring us of their award-winning bona fides, announces a production teeming with visual gags and cultural references. A bow towards Swan Lake leads to a lascivious piece called The Gannet, its dialogue culled from episodes of Lena Dunham’s Girls. The logic behind this is deliberately elusive, and those only loosely acquainted with pop culture may find their attention snagging on references. Has one sequence, engulfed with gangsta slang, been furnished by the website Gizoogle? (And why is that the shizzle?)

This may be the real condition of Americanitis, the conceptual framework for the performance that Quinn has given various definitions, but that amounts to a din of quotations and YouTube songs, like postmodernism ringing in our ears. A placard announces “The Seagull, for ages”, in near apology, when the production cleaves longest to Chekhov. Yet it’s here that the show is most arresting, from Gina Moxley’s girlish narcissism as Arkadina and Samantha Pearl’s parodically wide-eyed ingenue to Richard Walsh’s endearingly gauche playwright and Una McKevitt’s magnificently sustained scowl as Masha.

At various points the performers find themselves covered with sheets, like ghosts or ancient furniture, and more than any recent Pan Pan riff on the classics, this seems fretful about its inheritance. “Avant-garde hero? Avant-garde nihilist? Avant-garde a clue, if you ask me,” goads Moxley at one point, and the poison in that pun feels like the true anxiety of anyone who would attempt something new, knowing that it can’t always fly. Until Oct 5