The title of consummate Swiss clown Martin Zimmermann’s new show is a breezy salute. But is his sometimes sour persona really seeking a connection? 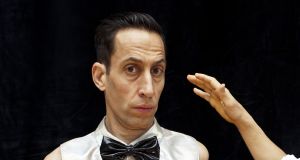 One of the more unlikely breakout stars of the Ulster Bank Belfast International Arts Festival’s theatre programme this year has been carpentry, a medium whose expressive potential has become the focus of shows that have the right to remain silent.

First we saw wooden craftwork with captivatingly alternative uses populate the stage of Robbert&Frank/Frank&Robbert’s charmingly homemade To Break. Now come the collapsing contraptions of Martin Zimmermann, the Swiss choreographer, acrobat and clown. A conspiracy of panels, frames and hinges, which progressively seem unhinged, the main characters of Hallo are the accidents just waiting to happen.

Zimmermann, who presents a wiry and artless persona, first takes up residence in a small insubstantial box, which will whizz and spin around the stage, before splitting apart and almost disappearing. He finds a new dwelling, a large rectangular frame with sliding panels, and though it has the depth of a matchbox, it seems like he is moving up in the world – until this home begins to fall down around his ears.

In one telling sequence, he escapes a certain crushing when the ceiling caves in and he slips unharmed through an open aperture. Some will remember Buster Keaton’s famously perilous stunt in Steamboat Bill, Jr, and that association seems no accident: Keaton, a favourite of Beckett’s, made comedy out of the bleak despair of an indifferent universe and Zimmermann claims a certain kinship. We hear demonic laughter goading him from below, he turns to the audience frequently to mock their laughter at his predicament, and - with the assistance of someone with ninja-like invisibility - he discovers various doubles of himself through mirrors, cracks and innumerable trap doors.

He is, however, a fascinatingly off-putting character, a frenetic clown whose exasperated suffering creates little rapport with the audience – it isn’t surprising, on the night of my viewing, to see one person leave unhappily with her children after an awkward bit of audience invasion. Existential clowning may be an even harder balancing act than Zimmermann’s more dextrous and gravity-defying physical displays, some of which are truly inspired. But a simple, unadorned and direct routine at the show’s end, using no stage apparatus more complicated than himself, seems most effective. To engage an audience in human struggle, however absurd, you must first prove yourself human.