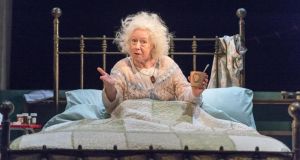 Bailegangaire: ‘Nothing could be more entrancing, nor as devastating, as Marie Mullen’s transcendental performance’

Our first sight of Mommo, the senile matriarch at the absolute centre of Tom Murphy’s extraordinary Bailegangaire, is utterly shocking. So much so, that it takes a few minutes to let the image of Marie Mullen settle: there she sits, upright in a bed in the kitchen of a cottage, beneath a preposterous cloud of white hair, like an illustration from a folk story.

It’s a daring manoeuvre from director Garry Hynes, which gives the play an almost otherworldly focus without losing its rooted sense of reality. As Mommo endlessly retells – but never finshes – the story of how Bailegangaire came by its name, a family’s continuing trauma clusters around her. Even Rick Fisher’s lights seem to originate from a single, central force, flinging more sombre shadows into the recesses of the room.

Those attentive to Brigit, Murphy’s new companion piece to the play, set 30 years earlier, will see a poignant inheritance in Francis O’Connor’s set, where significant items have been stored away, high in an alcove, like haunting spirits. The fireplace is boarded up, and dismal 1980s additions, such as a bar heater or popping radio, squat there as sullenly as Catherine Walsh’s Mary, Mommo’s dutiful granddaughter.

In Mullen’s astonishing performance comes an amplification of her earlier character’s pain and humour, now given the free rein of second childhood, from girlishly coy expressions to cootish laughter. And just as her folkloric telling of a fateful laughing competition meshes with her present, so Murphy’s depiction of this battered, grieving Ireland finds discomfiting resonances with our own.

Nearly 30 years ago, Mullen played Mary in Druid’s original production, and it’s revealing now to see Walsh become more animated when she takes over Mommo’s story, as though it were a torch to be passed. As her sister, Dolly, Aisling O’Sullivan is more commandingly acerbic and fascinatingly damaged, with a voice that could strip paint, and Hynes guides the taut rhythm of their arguments to reveal the intoxicating, imprisoning nature of fiction. “Another story,” protests Mary when Dolly plans to explain away an “illegitimate” child. “Oh the saga will go on.” The desire of the women, however, and that of the play, is to reach closure; for Mommo to conclude, for the family to recognise the seeds of their trauma, and to finally begin anew.

It’s sobering, as part of our own national narrative, to hear Mommo’s litany of “the misfortunes” that perversely fuel the laughing competition, or of “fields, haunted by infants”, which made for grim news stories then and now. That may bring a fresh urgency to Druid’s phenomenal retelling, yet nothing could be more entrancing, nor as devastating, as Mullen’s transcendental performance. Masterfully poised between myth and reality, levity and sorrow, her Mommo seems eternal, slipping from one world to another.