Mourners gather for funeral of director killed in Turkey 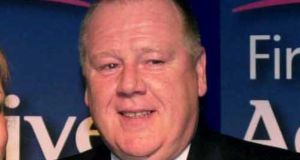 John Donnelly in 2000. The 64-year-old was found dead at his apartment in Turkey earlier this month, having suffered a stab wound. File photograph: Don MacMonagle

Musical numbers and tributes to the late stage director John Donnelly shaped an 1½ long funeral service which, fittingly, took the form of a theatrical event.

The ceremony, held on Tuesday at the Naomh Mearnóg GAA club in Portmarnock, north Dublin, was adorned with photographs and theatre programmes from some of the many shows Mr Donnelly helped create during a long celebrated career.

The 64-year-old was found dead at his apartment in Turkey earlier this month, having suffered a stab wound. His life was commemorated by a crowd of more than 300 people, many from the world of theatre which had helped define him.

“John’s untimely death in Turkey was a tragic one for us,” his brother Brian said.

“But we don’t want this to be a one-act tragic play for John. We want it to be an uplifting celebration of John’s life.”

In a humour laden eulogy, he pondered his brother’s early life – the formative years of a future artist, born of the early school operettas and later, the musical society at O’Connell secondary school in north Dublin.

For years he had dreamed up his stage shows while employed by the Department of Agriculture inspecting export cattle on the city quays and later at Dublin Airport.

Brian recalled his brother the “Christmas-aholic” who dressed “like a million dollars”, and with an ability to discover musicians before they ever became famous.

Punctuating the morning’s tributes was a host of singers performing various stage numbers, many from Mr Donnelly’s own productions. The anthem from Chess, Time Heals Everything, The Impossible Dream and On My Own from Les Miserables and were among a catalogue befitting the funeral of a stage veteran.

The non-religious service was led by interfaith minister Rev Karen Dempsey who said in the place of prayers and rosaries, “we will have flowers, we will have beauty; we will have music and we will have song . . . these were John’s prayers. And cake.”

While this oft-referenced taste for pastry drew repeated laughter, Mr Donnelly was remembered too for his frequent lateness and idiosyncratic laugh; a passionate character, quick to fight but also to reconcile, and a man with the ability to spot and nurture talent from its infancy.

“We want to join together in our grief, our anger, our shock, and our sadness at the great injustice of how he was taken from us,” Rev Dempsey said.

Music, she added, was his lifelong love affair. “It was his language and how he made his impact on the world.”

Mr Donnelly is survived by his partner Gavin, his mother Peg and his siblings Geraldine, Valerie, Claire, Helen, Margaret and Brian, a number of whom addressed the ceremony and sang. His father John is deceased.

“We are who we are because of the people that have touched our lives,” Gavin said in a tribute read out by Mr Donnelly’s sister Claire.

“And John has touched so many lives, especially mine. At the moment I am totally lost but I know you are and will always be with me, helping me on the right path.”

Pat Lawlor from the Wexford Light Opera Society – with which Mr Donnelly had a long standing collaboration, producing nine shows including Evita and Man of La Mancha – told the congregation how he had arrived on the town “like a whirlwind”.

“Thanks for the memories. You are up there with the greats of Wexford Light Opera Society,” he said.

“I am sure you are out there planning a new show but whatever it is don’t let it be Oklahoma.”

Dying for an iPhone: Inside the factories that produce Apple’s bestselling product
8

Why I love: The Great Gatsby, by F Scott Fitzgerald
9