It was a year that energised the city, its artists and, most significantly, the public 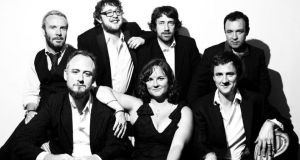 A week is a long time in politics, and in the bewildering first days of January, when Limerick City of Culture immediately turned into a fiasco, you could be forgiven for thinking the year might never end.

The fallout, though, rallied the artists and citizens of Limerick to reclaim their event, eventually vindicating the scale, local engagement and purpose of Karl Wallace’s original programme – later overseen by Mike Fitzpatrick – and leading to a year that energised the city, its artists and, most significantly, the public.

Late in the year Beautiful Dreamers, a collaboration between Anu and Performance Corporation, played out on the streets, in a room high above the city and on the airwaves. Visitors could hear other artworks mentioned in its dialogue, from street paintings to Fuerza Bruta to the Grandmother, as though art had been absorbed into Limerick’s day-to-day conversation.

To reinvigorate the old Dell building in Castletroy with the spectacular Fuerza Bruta had more purpose than a cursory reading of the programme would suggest.

Likewise, the year’s biggest coup, a 7.5m giant that strode through the sunny city, smoking, spitting and farting like a trooper, was ultimately not about the monumental artistry and execution of Royal de Luxe’s Grandmother but about the artful stage management of the city’s streets. “It renewed Limerick’s self-confidence and self image,” says one artist. Some puppet show.

Not everything in the programme was as conspicuous, but the Made in Limerick strand of work could prove to be the most significant. It allowed Limerick artists to approach bespoke projects with imagination and consideration, often in collaboration with other arts disciplines and – partly by necessity – in unconventional spaces.

A good example was Joan Sheehy’s highly regarded The Colleen Bawn Trials. Staged at Shannon Rowing Club, it peeled back the real details of Ellen Hanley’s 1820 murder trial, the inspiration for Dion Boucicault’s melodrama, and reclaimed a dark story through startling theatricality.

Another, later in the year, was On the Wire, a promenade production at the old Sailor’s Home inspired by returning first World War soldiers, whose director, Terry O’Donovan, is a Limerick artist living in London. It was hardly the only artistic repatriation in a year marked by artistic homecomings.

Taken together, the art asked you to recognise Limerick’s history, the good and bad of its reality, yet to look at the city in new ways. Theatreclub’s ‘Moyross’, made with the estate’s community, looked deeper than the area’s bad rap (while featuring some excellent rap). Gúna Nua’s historical musical The Unlucky Cabin Boy, a collaboration with Mike Finn and the Brad Pitt Light Orchestra, epitomised the interdisciplinary strengths of the programme. Significantly, audience attendance was healthy, partly because of the quality of the work but also because of the consistency of opportunities to engage with it.

The true legacy of the city of culture, a year in which the artistry beat bureaucracy, may be more subtle. The Pulse Theatre Legacy project staged workshops during the year, building on the momentum to restore Limerick arts following several years of company closures and venue losses. This could be a turning point. The artists are collaborating, the audience is there and Limerick City Council – an important source of funding – has a persuasive reference for what the arts can do for Limerick.

It may have had a rocky start, but the city of culture needn’t end with a date.