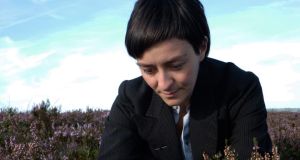 Boasting quasi-liturgical audience participation, expressive dance, nudity, bagpipes and drams of Scotch for everyone, Nic Green’s show reads on paper like a stereotypical spoof of experimental theatre. So it is a testament to the presence and abilities of Green – who co-created this work with Tim Harbinson – that she manages to meld these ostensibly ludicrous elements into an unexpectedly affecting whole.

Flanked by four drummers and a piper, a besuited Green greets the audience with an incantatory, if slightly stilted, exchange about her relationship with her father and his Scottish homeland. Then, to building percussion, she slowly begins rhythmic movement, half-flamenco, half-highland fling, maintaining a hypnotic air even as proceedings grow faster in pace, uninhibited in emotion and unburdened of clothing. If the closing rendition of Gaelic folk songs lacks the same kinetic impact and the whole enterprise skirts self-parody, the overall effect is stirring and heartfelt enough to trump such quibbles.