Culture Shock: And so to bed . . . the nightmare of sleepless nights

The way we sleep, and when we sleep, has been altered by human invention – from pills to alarm clocks – but most profoundly by artificial light 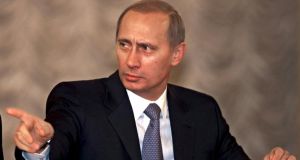 Along with Margaret Thatcher, Vladimir Putin – neither of them sterling role models – both claimed to subsist on four hours sleep a night. To lesser mortals that qualifies as chronic sleep deprivation

For such a life-changing procedure, the narcotomy is never explained in great detail. Revolutionary, untested, highly experimental, it’s an invasive surgery intended to close off “a few loops in the hypothalamus”, which regulate the need for sleep. “The wires are cut,” a doctor assures one of his patients in one of JG Ballard’s earliest short stories, Manhole 69, with as much hubris as a mad scientist can muster in layman’s terms: “You couldn’t sleep if you wanted to.”

As far as science-fiction ideas go, to be able to live without rest is an arresting premise, somewhere between a wishful fantasy and a waking horror. “At last we’ve freed the mind, raised it out of that archaic sump called sleep. With virtually one cut of the scalpel we’ve added 20 years to those men’s lives.” Needless to say, the narcotomised quickly go insane. With no shape to the day, no refuge of dreams, no escape from themselves, the walls of consciousness begin to close in. It’s a chilling paradox: an insomnia nightmare. It might be a useful parable for our present predicament, where sleeplessness is on the rise.

The way we sleep, and when we sleep, has been altered by human invention – from pills to alarm clocks – but most profoundly by artificial light. In his book, At Day’s Close: Night in Times Past, the historian Roger Ekirch unearthed a culture of very different sleeping patterns to our own, and societies that flourished in the dark.

Long before they were instructed to aspire to eight hours of uninterrupted shut-eye, people used to engage in “segmented sleep”, slumbering in two distinct shifts. Both Homer and Chaucer referred to a “fyrste sleep” in their narratives, and Ekirch writes of how people filled the hours between sleeping phases with reading, writing, praying, smoking, eating, visiting neighbours, or having sex. (In the 16th century, sex after first sleep was considered the best time to conceive.)

Yet narcotomy fantasies are just as deep-rooted, where unproductive hours have long been seen as either wasteful or sinful. “There’ll be sleeping enough in the grave,” records Benjamin Franklin in 1741, hardly the only politician to preach a doctrine of wakeful ambition. Margaret Thatcher and Vladimir Putin – neither of them sterling role models – both claimed to subsist on four hours sleep a night. To lesser mortals that qualifies as chronic sleep deprivation.

Over the course of two centuries, we’re now sleeping less than we ever did. Chronic sleep disorders are alarmingly prevalent and have been linked to immunity deficiency, heart problems and depression.

Now, in order to switch off, we tend to switch something on: Just as the electric light changed human sleeping patterns profoundly, now the “blue light” of computer screens, televisions, smart phones have begun to mess up our circadian rhythms. The photoreceptors in our eyes are attuned to daylight, a natural call to rise and shine, but they’re tricked by the new glare to keep the body alert.

Art has never proudly advertised itself as a rest aid, yet it’s not hard to find a proven soporific. Johann Sebastian Bach’s trickling Goldberg Variations – which are being performed this week at Kilkenny Arts Festival – were composed at the behest of an insomniac Russian Count, seeking music that was “smooth and somewhat lively in character”.

He might have tried the theatre, where dozing is either an unintended by-product, a sought effect (such as the liminal state encouraged by the marathon performances in Japanese Noh theatre), or, for some, an occupational hazard. Informed that the theatre critic James Agate had drifted off during the opening night of his play, The Improper Duchess, in 1931, the Belfast-born playwright JB Fagan decided to let sleeping dogs lie. “Don’t wake him,” he said. “Agate’s always very good when he’s asleep.”

Given the “white nights” described by Beckett in Ohio Impromptu, the “fearful symptoms” of the writer’s own creative and restless struggle, Agate might have been lucky to catch his zs where he found them. You spend your life trying to master the darkness – and all it symbolises – railing against Ballard’s “pseudodeath”, Chandler’s “the big sleep”, while implored by Thomas to “not go gentle into that good night”. A new show at the Edinburgh Fringe, To Sleep To Dream, aware of the anxiety over what people do in the dark, even imagines a world where dreaming has been made illegal. It’s a nightmarish vision, with just a shiver of reality. Still, it’s nothing to lose sleep over.