Social media enables activists to reach audiences as never before, as the #WakingTheFeminists campaign knows. It’s all part of telling women’s stories 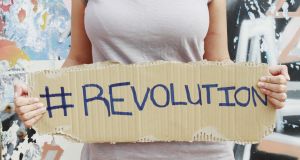 ‘The personal is political” became a rallying cry of radical feminism in the 1960s. That women’s history had gone unspoken showed how unequal the system was, according to the group of American women striving to put gender equality at the forefront of post-cold-war politics. There could be no political change, they argued, until the personal experiences of women in the cultural sphere were made visible.

There were symbolic gestures, such as the binning, at the 1968 Miss America pageant, of symbols of women’s oppression: bras, high heels, pornography. And there were concrete achievements: the banning of segregated employment listings; the inclusion of gender discrimination in the US Civil Rights Act of 1964; and the commemoration of the achievements of the suffrage movement as Women’s Equality Day.

The new millennium and the technology that defines it have reinvigorated the radical-feminist agenda, offering a way to reach an audience of a size and range that would have been unimaginable even recently. Scholars call it networked activism; it is also known as hashtag feminism, in a nod to Twitter, the social-media forum that has proved so influential in taking gender-equality issues to a mass audience.

The highest-profile Irish example is #WakingTheFeminists, the movement prompted by the Abbey Theatre’s launch of Waking the Nation, its season to commemorate 1916. It began when Lian Bell, a theatre designer and producer, made her frustrations public on her Facebook page: “Still mulling over the Abbey Theatre’s male-dominated programme for 2016,” she wrote. “Found myself seething, wrote a giant list of questions. So here is a barrage of thoughts & questions, if only to get them off my chest. Answers or more questions welcome. Deathly silence welcome too.”

Her comments started a wave of testimony from women who had felt unable to express their experiences of unconscious gender bias and, occasionally, outright misogyny in theatre in Ireland. In an attempt to engage with the Abbey about its season’s gender imbalance, the conversation was moved to Twitter, under the hashtag #WakingTheFeminists.

Two weeks later more than 600 people, including the Abbey’s director, Fiach Mac Conghail, gathered in the theatre’s main auditorium to listen to 30 women artists share their experiences and suggestions for change. #WakingTheFeminists was the top-trending topic on Twitter that day, and women in the arts all over the world, from Addis Ababa to Hollywood, showed their support, holding up signs in Twitter photographs.

If you don’t use social media #WakingTheFeminists might seem like a storm in a teacup. But social media has been the starting point for a range of feminist campaigns. In a world where the news industries that create our narrative structures are still dominated by men – female voices make up an average of only 28 per cent of broadcasting time on Irish current-affairs programmes – the internet has helped to democratise media.

Platforms such as Twitter, Facebook and Instagram have given women a way to share their stories across the globe. They have enabled the phenomena of the Everyday Sexism project, for example, which has provided a forum for more than 60,000 women to share their experiences of casual sexual harassment, and of Black Lives Matter, “an ideological and political intervention” that three feminists initiated to raise awareness of racial prejudice in the US.

Social media has also been effective at initiating change. #NoMorePage3 began in 2012 with a letter to the Sun newspaper from Lucy-Anne Holmes, who asked it to stop printing photographs of topless women on page 3 each day. The UK tabloid began printing them in the 1970s, as a circulation booster that was quickly copied by other red tops. Holmes then launched a digital campaign around Twitter and the #NoMorePage3 hashtag. More than 250,000 people signed her online petition, and supermarkets and newsagents agreed to move tabloids to higher shelves, out of children’s eyeline. After three years of campaigning the Sun dropped page 3 last January.

#NoMorePage3 used numerous tactics, among them printing T-shirts and releasing a Christmas single, but individuals made the real impact, by sharing their stories.

That campaign was fuelled by a single, concrete goal. #WakingTheFeminists’ aims are more diffuse. The Abbey now says it will adopt a gender-equality policy, and the movement has asked it to commit to a timeline and measurable goals. #WakingTheFeminists has approached the Gate Theatre and the Arts Council. The former has the second-highest annual Arts Council theatre grant (at €860,000 in 2015, compared with the Abbey’s €6.2 million), and has agreed to meet the group this week; the latter, according to #WakingTheFeminists, must implement a sector-wide gender-equality policy.

The movement’s agenda is still evolving, under the leadership of a group of people who have committed their skills and experience for a year, the theatre director Lynne Parker, the actor Olwen Fouéré, the artistic director Cian O’Brien and the academic Brenda Donohue among them.

It is too soon to evaluate the campaign’s impact, but we know that its story will continue to unfold on the social-media sites from which it sprang. It is on the movement’s Facebook page and blog that you will read about the initiatives it is involved in, promoting the work of female theatre-makers and researching women playwrights who have been written out of the canon. Crucially, it is there that you will read the testimony of dozens of women working in the industry – or no longer working in theatre. New aspects of the working conditions for women in the arts continue to be revealed.

It is those stories that will inspire other women to take action and seek change. The personal is still political.

Joan O’Clery, costume designer None of us working in this sector consider ourselves to be particularly well paid. But some of us are more equal than others. My craft is seen as essentially feminine – and it is one area where most practitioners are female. But still I look at my pay cheque at the end of the production and ask, is there an unconscious gender bias placed on one design discipline over another?

Ella Clarke, choreographer and dancer I have worked many, many times as a member of a creative team producing literary works for stage. I have fought over and again to have my role titled in relationship to input into the creative process. Sexualised objectification of the body is often the preserve of the dancer in literary theatre. How’s about a sexy eel? Or a couple of semi-naked temple dancers? Maybe a spot of knicker- and bra-wearing witches for Macbeth?

Morna Regan, actor and writer This debate for me is not just about women in art but about how women who are not artists are in turn denied a full experience of life and its potential by not seeing themselves reflected there enough. It’s the direct result of an imbalance of female practitioners.

Ursula Rani Sarma, playwright Apparently, the work we female Irish playwrights are producing isn’t good enough. So have all of the other Irish companies and international ones staging our work got it wrong? Are they just not as “discerning” as the Abbey? How patronising is that? How dismissive of those of us with productions occurring nationally and internationally every year?