'Once' director John Carney's obsession with musical drama continues with the release of Sing Street, a movie set in '80s Dublin about a teenage boy who, in time-honoured fashion, gets a band together to impress a girl 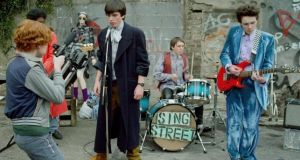 'Once' director John Carney's obsession with musical drama continues with the release of Sing Street, a movie set in '80s Dublin about a teenage boy who, in time-honoured fashion, gets a band together to impress a girl. He concedes he is now firmly associated with the musical genre.

"This is the label that I've got, this is the brand, apparently. It's very funny to be a brand," he says, slightly exasperated at the thought. "The only other brand I've been associated with is Batchelors Walk".

RTE comedy-drama Batchelors Walk and its cast of likeable losers are recalled fondly, but the relative success of the show did not add up to financial success for John. He recalls applying for a commercial-directing job shortly after the show and the money it brought him came to an end.

"They asked me, 'we want that vibe of Batchelors Walk, would you know anything about that?' And I didn't get the gig".

For Batchelor's Walk, on which Jon shared writing and directing credits with his brother Kieran and Tom Hall, music was also a prominent part of the 'vibe'. John now says he feels the scoring on the show was overdone, but rather than dialling the music down in future projects, he went even further, following his instincts to the huge success of 2007's Once and 2013's Begin Again, starring Mark Ruffalo and Keira Knightly.

Sing Street does not have any such big name actors attached to it, but it compensates with a feel-good story, catchy music and an appeal to nostalgia for the Irish decade so often described as dreary and hopeless but populated here with "musical people" and "full of songs with a justified source".

The appetite for culture that looks back is evident in the heated discussions over authenticity and accuracy that spring up whenever a period piece appears. John says he took just a few liberties in Sing Street for the sake of storytelling .

"I think its important to get these things right and I don't like people taking too much licence. That said, I did want to capture a period of three or four years in my youth, not just one summer,' he says. "So I did sort of concertina, you know, a few summers, and I tired to get away with that by sort of, not just disregarding it willy-nilly, but by saying 'this film is fun'."

Time-rich observers have taken to the internet to point out some of Carney's concertina-playing, such as the featuring of a Duran Duran track that hadn't yet been released. Other inaccuracies were accidental.

"I have to say, I was actually sick when we did the shot and I was in bed, so I can't take responsibility for this error, but there's a bag of potato crisps in the window of a shop that were only invented in the '90s".

John Carney was in conversation with Hugh Linehan and Angela Dorgan on today's Off Topic podcast. Sing Street is released on March 17th.