Should we continue to fear another world war?

Opinion: The anniversary of Hiroshima last week gives us cause to commemorate the many thousands killed and injured 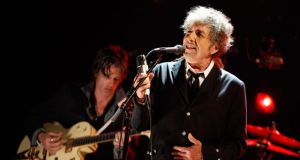 ‘Bob Dylan has subsequently downplayed the notion that he wrote Hard Rain’s A-Gonna Fall in a hurry because he wasn’t sure he’d have time to finish it. The idea that catastrophe was lurking at our elbow did, nonetheless, add a pungent flavour to cultural endeavours during the four decades that succeeded the second World War.’ Photograph: Christopher Polk/Getty Images

In 1973, the cultural apologist Ernest Becker published a terrifyingly clear-eyed tome entitled The Denial of Death. It would be futile to attempt any comprehensive summary of his theories, but the spine of the argument concerned the notion that civilisation exists to distract us from the certainty of our own mortality.

Such thoughts are triggered by the largely unnoticed passage of Hiroshima Day last week. The anniversary of that Japanese city’s nuclear immolation gives us cause to commemorate the many thousands killed and injured. It invites us to ponder the appalling moral calculations taken during wartime. It used to allow us an opportunity to ponder the continuing, very real possibility of future nuclear Armageddon, but that conversation now seems all but ended.

True, there are still some 4,100 primed nuclear weapons on the planet. Such volatile nations as Pakistan and North Korea have conducted nuclear tests. And the two largest powers in the game of genocidal bluff – Russia and the US – are on far from friendly terms.

Danger of complacency Yet the world seems to have rolled over and, stubbornly shutting out the continuing threat of annihilation, allowed itself to drift into a complacent snooze.

Bob Dylan has subsequently downplayed the notion that he wrote A Hard Rain’s A-Gonna Fall in a hurry because he wasn’t sure he’d have time to finish it. The idea that catastrophe was lurking at our elbow did, nonetheless, add a pungent flavour to cultural endeavours during the four decades that succeeded the second World War. The threat was personal and public. As well as pondering the unimaginable collapse of society, the average citizen factored in nuclear conflagration as plausible cause of his or her inevitable death. You might be carried off by a tumour. A car accident might do for you. Then again, you could be one of the several million irradiated in a nuclear dust-up over nothing much in particular.

Mad agenda By the time the cold war ended in 1989, a notion had got about that the two superpowers – doped up on mutually assured destruction – were never likely to unleash the missiles.

Subsequent digging in the Soviet files revealed quite how much wishful thinking had been going on. In 1983, Lieut Col Stanislav Petrov, duty officer at the USSR’s early warning centre, was alerted that five nuclear weapons had been fired on his nation by the United States. The colonel gambled that he was dealing with a glitch in the system and decided not to alert Yuri Andropov, hawkish general secretary of the Communist Party. It involves only minor hyperbole to suggest that we owe our existence to the clear thinking of Col Petrov (still with us at 75).

It is worth remembering a notorious, near-contemporary utterance of the IRA. Following the Brighton bombing, the organisation warned: “Today we were unlucky, but remember, we only have to be lucky once. You will have to be lucky always.”

Pragmatic politics The world has to be unlucky only once.

It has been lucky so far. Should our good fortune not hold out then a greatly diminished next generation might end up contemplating our foolishness from damp caves.

It was not just the Campaign for Nuclear Disarmament that understood this. Even former US president Ronald Reagan grasped the inherent lunacy of the ongoing gamble. Then British prime minister Margaret Thatcher was aghast when informed that, if agreement could be reached with the USSR, her American counterpart would consider mutual disposal of all inter-continental ballistic missiles. Disagreement over the Strategic Defence Initiative put an end to that fantasy and we were left in thrall to the demonic algebra.

The fear has largely gone away. Almost nobody writes pop songs about the “eve of destruction”. Hollywood now, once again, invites giant lizards to bring about the apocalypse. The denial of collective death continues. We don’t even whistle in the dark any more. Almost nobody seems to notice the dark. Can we get away with our hubris forever?

Clarity lost in fog of war