Review: The Kitchen, the Bedroom and the Grave 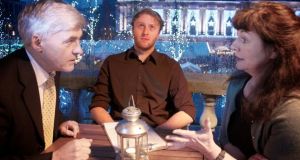 The Kitchen, the Bedroom and the Grave
Baby Grand Studio, Belfast
***


It’s not so much a whodunnit as a tense does-he-do-it? Donal O’Hagan’s debut play first saw the light of day in 2010 as a rehearsed reading. In the intervening years, Accidental Theatre has kept faith with the script, nursing it through to full production and handling its difficult theme with sensitivity and no little imagination.

Dempsey (Jason McLaughlin) is a London-based television reporter, sent home to make a documentary about post-ceasefire Northern Ireland, a subject he is convinced is past its sell-by date. But his cynicism is tempered and his journalistic instincts diverted by a family dilemma way beyond his self-absorbed preoccupations. He is in a not entirely convincing long-term relationship with Mark (Cillian O’Sullivan), a psychiatrist from Dublin. Gay and godless Dempsey might be, but his flippant little world is turned upside down when his father Tom (Noel McGee), a recently retired socialist schoolteacher, begs his assistance in taking his life before terminal cancer robs him of his dignity and decision-making ability. This agonising choice for father and son would register more effectively if the terrible truth were not delivered through the unlikely medium of a cold hospital letter.

Film-maker Conan McIvor’s slick back-projections cleverly illustrate the unexpectedly diverse human elements of the unfolding documentary. Director Richard Lavery utilises the device both to interpret the way in which McLaughlin’s underplayed Dempsey experiences life through the filter of a lens and to capture some of the most troubling and intimate moments in Tom’s disintegration. McGee and Maggie Cronin, as his magazine-columnist wife Martha, bring much needed warmth, empathy and truth to the chilly proceedings, while O’Sullivan struggles to swap sardonic humour for a denouement, in which Mark’s professional reputation is put on the line in the name of love. Ends Saturday , then tours to Omagh, Armagh, Downpatrick, Newtownabbey, Derry