The devastating story of the Irish rugby team that swapped the pitch for the battlefield in Gallipoli and how Lieutenant Andrew Horne documented it. Exhibition runs in Collins Barracks until the 30th of April. Video: Ronan McGreevy 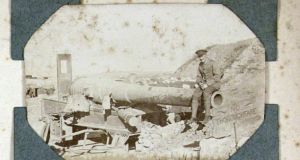 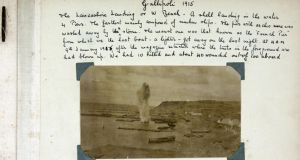 The photographs were taken by Dr Andrew Horne, from Ballinasloe, Co Galway, who served in the Royal Army Medical Corps in the first World War 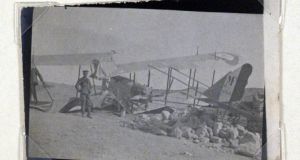 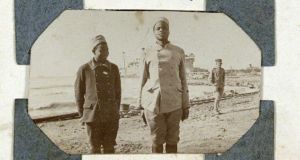 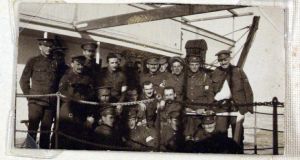 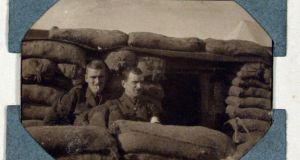 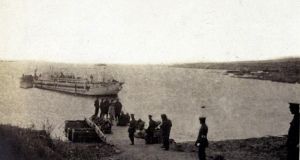 Photographs of the Gallipoli campaign which have never been made public have gone on display at the National Museum of Ireland in Collins Barracks.

The photographs were taken by Andrew Horne, a doctor from Ballinasloe, Co Galway, who served in the Royal Army Medical Corps during the first World War.

His album shows shells exploding on the beaches of Gallipoli and a rare photograph of the river Clyde, with a converted coaler which effectively became a coffin ship for the Royal Dublin Fusiliers and the Royal Munster Fusiliers during the Gallipoli landings on April 25th, 1915.

There are also photographs of captured Turkish soldiers, crashed planes and the evacuation of Gallipoli in January 1916, the only successful operation in a military disaster that cost the Allies 80,000 fatalities without achieving anything.

Taking personal photographs was technically difficult and also illegal except if they were taken by officers. As a doctor, Dr Horne was sufficiently far behind the front lines to get a better view.

He landed at ‘W’ Beach at Cape Helles on the tip of the Gallipoli peninsula on April 25th, 1915, as part of the 29th Division. The landings at W Beach and V Beach, where hundreds of Irishmen were killed, were disasters. The Gallipoli campaign is considered a military failure. “Nobody can believe we had such a time and came through it alive, but here we are,” Dr Horne wrote later.

He was one of the five officers who were the last to leave Gallipoli on January 9th, 1916. He went on to serve in the Mesopotamia campaign and survived the war.

Lar Joye, who is curator of Irish military history at the National Museum of Ireland, described the 99-page album as a “hugely important piece” which will attract international attention with the centenary of the Gallipoli landings occurring in April.

Dr Horne’s life is one of 21 lives of Irish men and women in the war featured in Recovered Voices: The Stories of the Irish at War, 1914-15.

Among those to feature in the exhibition is well-known poet, nationalist and former MP Thomas Kettle, who was killed at the Battle of the Somme in 1916. His medals are on display, along with a framed copy of his famous poem To My Daughter Betty.

The often overlooked role of women in the first World War is covered in the story of two sisters. The Burrows sisters, Eleanor and Rosamund (“Poppy”), volunteered to work as nurses, serving at a military hospital in northern France.

Also featured in the exhibition is Clarisa Maud Crawfurth Smith, an Englishwoman living in Ireland with her engineer husband. Head of a 60-person Red Cross unit in Dublin, she turned her home at Ailesbury Park into an emergency hospital during the 1916 Rising.