On the woman's day of Christmas 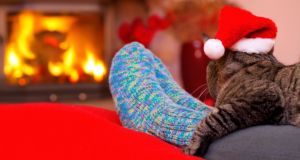 Today is Nollaig na mBan: Women's Little Christmas; Small Christmas. A litany of names for the sixth of January - the last of the 12 days of Christmas and the day on which the Three Wise Men are supposed to appear for the first time in the Crib. They rarely do of course, since January 6th is also traditionally the day the decorations finally come down.

Kevin Danaher's classic text The Year In Ireland: A Calendar has a short entry on the date. He suggests that the name "Women's Christmas" is explained by "the assertion that Christmas Day was marked by beef, and whiskey, men's fare, while on Little Christmas Day the dainties preferred by women - cake, tea, wine, were more in evidence". It's a custom which seems to have been passed on orally and informally, drifting down like feathers from one generation to the next. Few women spoken to for this article had read anything about Nollaig na mBan, but all had heard about it from other women or female family members - grandmothers, mothers, aunts.

If January 6th is Small Christmas, then December 25th is definitely Big Christmas. Big Christmas, big work. Traditionally the women did all the preparation for Christmas on top of the normal work on the farm. God rested on the seventh day but the women of Ireland didn't get to do the same until the twelfth and last day of Christmas.

For some reason the tradition of celebrating Nollaig na mBan was always stronger in the west of Ireland, particularly in Gaeltacht areas. It is also a non-urban custom. Academic Alan Titley suggests that the slow demise of the Irish language has contributed to the fading of this custom with its Gaelic title. Nobody is certain when exactly the term Nollaig na mBan entered the language; perhaps at the same time as Christmas began being celebrated here.

Women enjoyed the day in different ways. "Most women in west Kerry would have raised five or six turkeys for sale at the Christmas market. They kept the money - like egg money - and if there was anything left over after Christmas they spent it on themselves," Titley says.

Siobhan Fahy has lived in Ballyferriter on the Dingle peninsula all her life. "All the special food you'd had in over the Christmas to eat would be gone by Nollaig na mBan. The men here used call it `Nollaig gan mhaith' (no good Christmas), " she says wryly. "But us women would go visiting that afternoon. It was a very simple celebration, just eating a slice of currant loaf in someone's house and having a cup of tea and a chat, but that was the day you'd do something for yourself and have a rest after all the Christmas work."

Ellen O'Malley runs the annual Bard Summer School on Clare Island, exploring the relevance of Irish myths in contemporary society. She first heard about Nollaig na mBan from her aunt. "In her time women took the day off. Sometimes the men cooked for them. Otherwise women took it in turns to cook a meal in their house and invited their women friends to it."

Ellen was brought up in the Midlands. "I've only started celebrating Nollaig na mBan in the last few years," she says. "I don't quite know why I started - it seemed natural to do so." For the last few years she has been meeting a group of friends in a Dublin hotel on the morning of the sixth to have a communal breakfast. Fourteen women ate together last year. "It was wonderful."

The poet Mary O'Malley grew up near Ballyconneely in Connemara. "It was a tradition I was always aware of when I was growing up, even though we didn't celebrate it in my house. But I knew from my cousins who lived in south Connemara what went on there, where they did celebrate. It was mostly afternoon visiting, because women didn't stay out late in those days. And they didn't drink either, apart from maybe the odd glass of port. But it was mostly tea and cake and talk." Mary herself holds a special dinner every year. "The numbers are creeping up each year. I think it'll be 15 this time. We start late. And we don't stick to drinking tea."

"An old and formerly widespread custom still carried on in a few places is the lighting of candles on this night," according to The Year In Ireland. The Connemara-based writer and publisher Micheal O Conghaile remembers his mother lighting candles for every room in the house on that night. "I had to go round all the rooms every so often to check on them," he remembers. This memory is the subject of a Martin O Direain poem in which the poet wishes he was present to watch his mother light the Nollaig na mBan candles.

Michael Gill, who still lives on Inis Mor where he was born, also remembers the lighting of candles. "Every house had 12 candles in the window on that night. My mother would light them. And what we did on Nollaig na mBan was walk the island to look at the houses all lit up. In the days before electricity it was the brightest night of the year." They still light candles on all the Aran islands in this way today.

The scholar and fiction writer Angela Bourke has spent several Nollaig na mBans in the Dingle area and recalls seeing "quite elderly people in restaurants in Dingle on that night. These wouldn't be people who would normally eat out. The women were being taken out by their husbands, because it was Nollaig na mBan, and they were being treated." She suggests that urban Irish women now view the day as something akin to International Women's Day.

Certainly it seems that women have reinterpreted the day as the years have passed. The work of preparing for Christmas nowadays is not always carried out only by women, and Women's Little Christmas is now being marked around the country for different reasons: it has become more a celebration of friendship and sisterhood, rather than a customary break from a long period of hard work.

When writer Eilis Ni Dhuibhne spends the sixth of January on the Dingle peninsula, she goes to Krugers Pub in Dunquin. "All the women of the parish gather there from about 4 p.m. onwards. Women who don't usually go to the pub any other time of the year go there on that day. They take over a corner of the pub and talk. It's about talking, rather than drinking, although drinking goes on of course." She struggles to try and find a word to describe what the atmosphere is like before settling on "special".

Nollaig na mBan was not celebrated in my own house in Clare, but I always had an awareness of it, perhaps picked up by osmosis while visiting. Two years ago when I spent some months in Dingle I had a Nollaig na mBan party for 13 women. Everyone brought a bottle of wine and something they had cooked or baked as a contribution to the meal. All day we banked the fire with turf, ate and drank.

We talked for hours and hours, telling stories, and exchanging fragments of our lives. The first visitors arrived at noon and the last left at midnight. It wasn't the first gathering I'd ever had at which there were only women, but there was something indefinable about it which made it different to any other, before or since. There was an unexpected ease and openness among us all that day: a sense of solidarity and warmth and even something like pride for the day that was in it. We toasted ourselves and the coming year. Whatever it was about that day it shines out fire-bright against all others from those months I spent in Dingle.