From The Horrors to The Breeders: the week’s best rock gigs

Plus: get back in black for the return of The Jesus and Mary Chain, and roll like J Cole 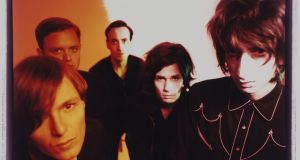 Listen to the wonders of The Horrors

A pinned tweet from Hunee reads: “I never think of ‘killing’ or ‘smashing’ or ‘destroying’ it when I play music. I am searching for another relationship with the dancefloor.” So get ready to get down on one knee in Tengu as the pairing of DJs Antal & Hunee shower you with kisses of disco, embraces of house and drippings of techno. This party will leave you utterly satisfied. And maybe married to some wooden flooring. LB

You may not be able to put a name to her voice, but for the last couple of years, she has been everywhere. Zara Larsson is the Swedish pop act who has lent her voice to big hits such as Tine Tempah’s Girls Like and Clean Bandit’s Symphony, leading tropical-lite beats and delivering big club breakdowns that soundtrack every second boohoo.com ad. Her two intimate gigs in the Waterfront and the Olympia will be nothing short of a euphoric pop party. LB

The Black Gate Cultural Centre, Galway, 8pm, €8 Since she released her album, As I Wake, Still I Dream, several months ago, Irish piano player Una Keane has been too busy for such mundane matters as an easy life. The album has also brought her a level of regard that she deserves, and for these shows Keane will surely prove that she is one of the best exponents of instrumental music that comes from a quiet, calm place. Keane also performs in Co Kerry next Saturday (October 21st) at An Lab Theatre, Dingle, 8pm, €10/€8. TCL

Let’s not call them a pre-grunge ‘super’ group, shall we? Formed in 1989 by Pixies’ Kim Deal and Throwing Muses’ Tanya Donnelly, The Breeders is now more of a family concern (Kim’s twin sister, Kelley, replaced Donnelly when she left in 1992; original bassist Josephine Wiggs is now back in the fold) than a temporary refuge for stray musicians. Musical edges, however, remain serrated, and although they haven’t released an album in almost ten years (not since 2008’s Mountain Battles), you can expect to hear new material that will see the light of day shortly. TCL

The Horrors formed about 12 years ago, based on a shared love of 1960s garage rock, 1970s punk, 1980s post-punk/goth and a general approach that delved more into the murky underground than the garish mainstream. The band is still far from mass acceptance, but over the past 10 years, five albums have been released, each one better than the previous. Latest work, V, is, therefore, their best to date, with The Ticket calling it “a thrilling sequence of magpie approaches delivered with due acknowledgment and respect”. You know what to do. TCL

There are many instances in pop music of the “what if” and “what might have been” variety, but few are as intriguing as that of Damon Gough. It has been over 17 years since the release of his fine Mercury Prize-winning debut, The Hour of the Bewilderbeast, and 15 since his superb soundtrack for the movie About a Boy. The remaining years have seen fitful releases, sporadic gigging (although he has performed in Ireland regularly enough), and the sense of genuine talent lost somewhere along the way. His older songs haven’t lost their charms, however, which is the reason he’s here for so many gigs. TCL

The Jesus and Mary Chain

The post-punk generation of teenagers in the mid-1980s would, presumably, now be settled homeowners, mortgage-holders with a family and certain responsibilities. All the more need, then, to book a babysitter to relive youthful nights of scoured punk rock enveloped by a Phil Spector-like wall of sound. Although back after many years with a really cool album (Damage and Joy), it is surely earlier barbed tunes such as Just like Honey and Some Candy Talking that will go down the best. The colour scheme tonight? Black, of course. TCL

J. Cole has been on the road since June, touring his 2016 album 4 Your Eyez Only, and the Dublin date marks his halfway point on the European leg. The tour has been described as sincere, electrifying and political – with the rapper addressing systematic oppression in the US by making his entrance in an orange jumpsuit. He promises to bring big show theatrics to the 3Arena and leading the best singsong about losing your virginity with Wet Dreamz. Tickets are still available.

Hurray for the Riff Raff

The kind of Americana and folk/blues that could only come from New Orleans is what we’re going to get when Alynda Segarra hits town. A singer-songwriter whose background fundamentally informs her writing (origins in the Bronx, as a teenager hopping freight trains across North America, referencing people such as Lucinda Williams, Townes Van Zandt, Gillian Welch), Segarra plugs her most recent album, aptly titled The Navigator, as well as other excellent records such as My Dearest Darkest Neighbour (2013) and Small Town Heroes (2014). TCL

Behemoth: The Satanist who took on the Polish government and won
10