In this collection, as in much of the poet’s work, dreams of permanence give way to history’s merciless demand to leave everything behind 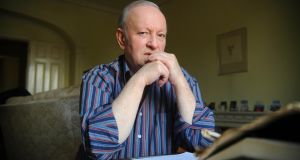 Derek Mahon: the industrial world he grew up in was gradually disappearing. Photograph: Michael Mac Sweeney/Provision

It seems apt that Derek Mahon wrote, in his 1985 poem After the Titanic, one of the great imaginative responses to the most famous of shipwrecks. Mahon was a product of classic working-class Protestant Belfast, the only child of a mother who had worked in a flax mill and a father who became an inspector of engines at the Harland and Woolf shipyard, where Titanic was built. Apt, too, that the perspective in the poem is not that of one of the drowned but of an escapee, the owner of the shipping line, J Bruce Ismay, haunted by the tragedy and doomed to be forever a kind of psychic fugitive. For all the impeccable elegance of his work, its brilliant reworking of traditional forms, Mahon himself seems in his early work to be a kind of fugitive, haunted by what he has abandoned but compelled to stay on the move.

He was born in wartime and later recalled playing “hide-and-seek / Among the air-raid shelters”. In the autobiographical Home Front his childhood is inextricable from images of the global catastrophe: “The released Jews / Blinking in shocked sunlight.” Perhaps because of this, Mahon has always been a cosmopolitan figure. After studying French at Trinity College Dublin he spent a year at the Sorbonne, in Paris, and then moved across the United States and Canada before settling in London for 15 years. He moved to west Cork, then back to New York, then back to Dublin. This restlessness marks much of his work, in which dreams of permanence always give way to history’s merciless demand to leave everything behind.

The industrial world Mahon grew up in was gradually disappearing. In A Refusal to Mourn he writes of his father that “the earth he inherited / Is gone like Neanderthal Man / And no records remain”. The certainties of empire were crumbling: it is not accidental that Mahon’s most famous poem, A Disused Shed in Co Wexford, from 1975, is dedicated to JG Farrell, chronicler of the British Empire’s fall. (See the entry in this series for 1970.)

It is not for nothing, either, that the fear of abandonment that rings out from that poem, although expressed in convincingly universal terms, echoes the deeper fears of Ulster Protestants. Mahon transcends his origins but does not deny them. The Troubles are an oblique presence, but in poetry the oblique has a special power.

So the title poem of his 1982 collection The Hunt by Night, a technical masterpiece of two long, unfolding sentences, is inspired by Paolo Uccello’s painting of the same name but evokes the much older cave paintings and their juxtaposition of art and killing: “Swift flights of bison in a cave / Where man the maker killed to live . . .”

In the Renaissance painting this impulse seems to have become merely a “Spectacle put on for fun / And not for food”. But echoing through the poem are “Foetid / Bestial howls” that disturb the courtliness of the language. Similarly, in Courtyards in Delft, which takes off from Pieter de Hooch’s painting, the daily order of a Dutch town in the golden age suddenly turns into “fire / And sword upon parched veldt”.

Yet Mahon can also make astonishing beauty from his sense of absence and abandonment. In this collection he revisits A Disused Shed in the tender and stately A Garage in Co Cork.

It evokes an abandoned garage but infuses it with life and grandeur. Mahon summons the ghosts of the family who once lived there. And with the characteristic wit that infuses his best work with its allusive playfulness he imagines a passing god: “Changing to petrol pumps, that they be spared / For ever there, an old man and his wife.”

In an equally beautiful poem, Tractatus, Mahon goes even further and transforms the sinking of Titanic into a rapturous image of the sun sinking into the sea. The loss is still there, but it is matched by wonder.

Getting closer to the whole truth of the Troubles
8

The Sound of the Shuttle: In defence of the Protestant imagination
10