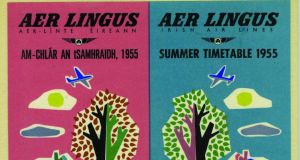 In January 1956, Aer Lingus’s publicity department forwarded one of the airline’s posters to the Arts Council. Entitled Dublin it comprised a highly stylised illustration of Ormond Quay. It was designed by Dutch designer Guus Melai. Although the British journal Modern Publicity had described the poster as representing “the best of European publicity material”, Arts Council chairman Patrick J Little wrote to Aer Lingus’s General Manager, JF Dempsey, stating that the council thought it had “very little artistic merit”. He further suggested that Aer Lingus, and all other “public bodies” should first consult with the council before “embarking on activities of this nature”.

Dempsey’s reply, courteous but firm, explained that the success of “commercial publicity” demanded “compromises with sheer artistic effort” and declined the offer of consultation stating that “time rarely permits us to delay production that usually has a degree of urgency”.

At this time the Arts Council’s remit included design development, but it is clear from Little’s comments that it had little understanding of contemporary advertising strategies. In fact the chain of correspondence indicates why a Dutch graphic designer was designing for the country’s foremost semi-state company in the first instance.

The publication of the Christenberry Report in 1951 by the Department of Industry and Commerce influenced political opinion on Irish tourism development. Gathering Irish and American expertise, it stated that tourism was key to the country’s future economic growth and was adamant that sub-standard advertising was a barrier in targeting lucrative European and US markets. Yet, Ireland was very much behind other European countries in developing the professional design expertise appropriate to the needs of contemporary consumer culture. This was particularly evident in the areas of graphic design and advertising.

Within a year of the report’s publication, Sun Advertising, a Dublin-based agency, began importing graphic design expertise from the Dutch airline KLM to work on its Aer Lingus account. KLM’s promotional strategies were exemplary by international standards and Aer Lingus had ambitious plans that included further expansion into Europe and the establishment of a transatlantic route. Melai was the first designer to arrive from KLM, enticed by a competitive salary, scenic countryside and a break from the social unrest that defined postwar Holland. Other designers soon followed, including Jan de Fouw, Piet Sluis, Gerrit van Gelderen, Ries Hoek and Willem van Velsen. While Melai left Ireland in 1956, the others made Ireland their permanent home. Working for Sun, they designed thousands of posters, press ads, timetables and brochures for the airline and Aer Lingus effectively became a de facto tourist authority promoting Ireland as a destination in parallel with its own services.

Given complete autonomy by Aer Lingus and Sun, the Dutch focused on what they perceived to be unique to Ireland and of interest to tourists. As exemplified by Summer Timetable, they took familiar motifs – lakes, mountains, cottages, castles, fishing boats – and re-presented these within a visual modernism that was radical even by international advertising and tourism standards.

Melai also designed for the An Tóstal festival and for CIE, while his compatriots worked for John Hinde and Bord Fáilte. Rejecting the more hackneyed imagery typical of Irish tourism publicity and generally avoiding painterly aesthetics, their work was revolutionary and their legacy enormous. In essence, they introduced professional graphic design practice to Ireland and established patterns for the promotion of the country that lasted for decades.