Modern Ireland in 100 Artworks: 1921 – Back to Methuselah, by George Bernard Shaw

Shaw’s vast cycle of plays, a combination of ‘creative evolution’ and satire, predicted that the ‘war to end wars’ would be merely the first in a series of conflicts 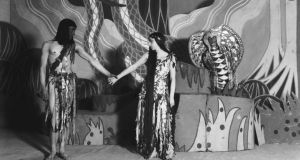 Staging: Barry Jackson’s production of Back to Methuselah at the Court, in London, with Colin Keith Johnson as Adam, Gwen Ffrangcon-Davies as Eve and Edith Evans as the serpent, in 1924. Photograph: Getty

In spite of the huge global interest in the Irish revolution, its political leaders were still much less famous than the best-known Irish person on the planet. The playwright, socialist and public personality Bernard Shaw had turned himself, as “GBS”, into one of the earliest personal brands: the witty, red-bearded intellectual gadfly, deploying humour to puncture conventional wisdom on every subject under the sun.

But in the years after the catastrophe of the first World War, Shaw, in his early 60s, turned his back on his role as a popular entertainer to write a vast cycle, which he called a “metabiological pentateuch” and a “Bible for Creative Evolution”, made up of a long preface and five plays, stretching from 4004 BC in the Garden of Eden to AD 31920.

In a postscript to a later edition of Back to Methuselah Shaw explained, “Like Shakespear [sic] I had to write potboilers until I was rich enough to satisfy my evolutionary appetite (or, as they say, give way to my inspiration) by writing what came to me without the least regard to the possibility of lucrative publication or performance.”

Shaw began Back to Methuselah in 1918, while war was still raging, and it is best seen as a response to the apparent “death instinct” that had manifested itself in mass slaughter. Cain, the original biblical murderer, appears through the plays in different guises. In the preface, Shaw, writing in the shadow of “our ruinous world wars”, sets up his play cycle as an “alternative to the scrapping of our species as a political failure”. He claims that “death is neither natural nor inevitable” and that humanity can will itself to evolve towards a much longer lifespan. In a strange combination of the biology of “creative evolution” and Swiftian satire, the play sequence hinges on the idea that human beings will grow beyond their current limits, living for hundreds of years. The cycle functions, really, as a kind of science fiction in which humans eventually evolve into pure spirits.

But Back to Methuselah is not mere fantasy. It is haunted by the fear that, if humanity does not grow up, the “war to end wars” will be merely the first in a series of wars. After these wars, as an old man on Burren pier (at New Quay, on Galway Bay) in AD 3000 recalls, statesmen finally discover that “cowardice was a great public virtue”. For the rest of the 20th century, of course, this discovery was a long way away, and the series of wars that Shaw feared became a fierce reality.

Early in the cycle a character says, “I hear you say ‘Why?’ Always ‘Why?’ You see things; and you say ‘Why?’ But I dream things that never were; and I say ‘Why not?” John F Kennedy would use the line in his speech to the Oireachtas in 1963 and suggest, “It is that quality of the Irish, the remarkable combination of hope, confidence and imagination, that is needed more than ever today.”

It was surely no less necessary, in Ireland and in Europe, in 1921.

The Music Quiz: What was Shane MacGowan’s first band called?
8