Meet the son of two behind Waterford Whispers News

The satirical website has become a national phenomenon, and is now a full-time job for founder Colm Williamson. Its rise seems unstoppable: after all, if it can send a North Korean astronaut to the sun . . . 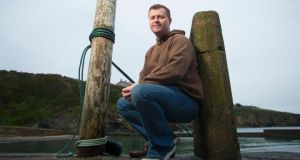 There is a point where Colm Williamson draws the line. “There was a moment this year when Robin Williams died and there were the neck nominations going on at the same time. I made a joke combining the two. ‘Robin Williams nominates three celebrities to do the same . . . ’ But you can’t be doing that.”

Insightful social commentary such as “man who no like water thing throws rock at shiny car”, “Grumpy Cat found dead in hotel room of suspected drug overdose”, or “Garda whistleblower not invited out with the lads from work this weekend”, deserves to be branded on our national consciousness.

Drawing from the expression “Chinese whispers” but giving it a local flavour, Waterford Whispers has been slowly conquering social network feeds over the past few years. It has about 240,000 followers on Facebook and has become a national phenomenon among people in their 20s and upwards, as a megaphone for the public’s “generally felt” opinions, and for purely ludicrous ones that are neither here nor there.

“It just started out as a way for me to go on about things I was angry about and that I wanted to see change around here,” says Williamson, the founder. “It was just local, just for Waterford at first, and then I started getting hits from Dublin and so I decided to do a few more national stories.”

Some will recall the Waterford Whispers “scoop” that North Korean media was reporting they had landed an astronaut on one of the sun’s black spots. Shortly after, Canadian blogs, American radio talk shows and Indian TV reported on the story. It was, of course, a spoof, but it gained Waterford Whispers worldwide attention, making an unprecedented number of people familiar with a city in the southeast of Ireland, and it caused their servers to be hacked.

“It definitely helped us have our most successful year yet. We get traffic from all over now, wherever there’s a big Irish immigrant population, so London, New York and parts of Australia.”

“Our traffic comes from readers aged 25-50, so it’s actually quite a wide spectrum,” says Williamson.

However well it does, it retains that feeling of being the product of a couple of evil-genius, zitty 16-year-olds in their bedrooms, perhaps because that’s not far from the reality.

“I work from my kitchen and the other two lads work from home. We have a Facebook group and we pitch headlines and jokes to each other there, and slowly work on them throughout the day until they’re ready. It takes ages.”

What’s the most important part? “The headlines are definitely what matters most, and after that the images. When I first started Waterford Whispers, I was good at Photoshop, and I think the funny images were a huge part of why it worked.”

The early success of Waterford Whispers prompted Williamson to take a keener interest in current affairs and journalism. He did a year-long journalism course and paid closer attention to politics.

“It taught me to craft an article, a piece of news, into a story. I could then write the short news pieces that you see on the website today. When we first started there was none of that.”

He takes his daily news with a dollop of that user-generated pillar of Irish satire, Broadsheet.ie. “It’s like if Euronews added a comment section to their ‘no comment’ segment.”

When asked about Facebook’s testing of a “satire” tag, which seeks to distinguish real news from satirical articles, Williamson is sure that it is not going to have much negative impact on Waterford Whispers, despite of the fact the website gets most of its traffic from Facebook.

“We’ve been through a recession, we’re coming out of it, the water charges have been a huge deal,” he says, suggesting that people’s awareness of current affairs has sharpened, and with it their ability to poke fun at themselves.

Whatever the reason, its star is on the rise and it has cemented itself as a sometimes subversive and always naughty voice in the national media.

“Ultimately it’s about having a laugh and being accessible. It works because it’s original. And because it’s all recognisable things for any Irish person.”

What does the future hold?

“We’re really developing our video content for 2015. We’re going to keep it ours, because if we went with anything national we’d have to tone things down and there’d be too many restraints. We’ll have a couple of live shows too, hopefully.”

Williamson, who is naturally reserved, says he’s continually out of his comfort zone now. “I have to do a talk in a college today. I mean, Jesus.”

The guys behind Waterford Whispers seem to have unintentionally mastered the art of gunning for gold while keeping it funny and down to earth. But when asked to come up with a headline for an Irish Times article about them, Williamson can think of nothing on the spot. And in response to the suggested, “man from Waterford defeats all odds and makes a success of something,” he lets a brief silence fall on the other end of the phone, before pitching in with “meet the son of two behind Whispers News”.