Limerick City of Culture gets visit from giant granny 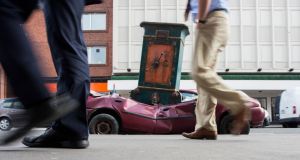 An art installation of a safe dropped on a car on O’Connell St in Limerick forms part of Limerick City of Culture’s calendar this weekend. photograph: alan place/fusionshooters

A crushed car in the middle of O’Connell Street, a bus carrying four tonnes of potatoes and giant footprints dotted mysteriously around Limerick – it’s all part of setting the scene for the much-anticipated arrival today of a giant Irish grandmother created by French street theatre group Royal de Luxe.

The highlight of the Limerick City of Culture calendar will see the 25-foot-tall grandmother ramble the city’s streets, transfixing audiences for 72 hours of free entertainment.

From today until Sunday, the renowned Royal de Luxe is delivering its giant saga, an original tale which was developed and specially scripted for the city of Limerick, on the streets of the city.

The 85-year-old marionette has already caused a stir in the city centre after a giant safe fell from the sky, “ crushing” a car parked on the main shopping thoroughfare. The safe contained the legends and stories of Limerick, which the Giant Grandmother will read during her three-day visit.

But until she begins her journey, the theatre company is revealing little about the surprises in store.

Up to 200,000 people are expected in Limerick for the performance which is costing €1 million to produce.

There were plenty of double- takes from curious shoppers yesterday when a Bus Éireann bus was spotted travelling through the city unable to stop for passengers as it was full of potatoes.

A team of 27 Lilliputians are tasked with handling the Giant Grandmother as she moves through Limerick, covering 19km. During her stay she will sleep in a nine-metre-long bed in Sarsfield Barracks tonight and Shelbourne Park tomorrow.

The giant granny will also enjoy afternoon naps in Russell Park and Lee Estate, snoozing in her 6.5-metre-high, five-tonne wheelchair.

On Sunday the half-Irish, half-Breton grandmother will set sail from Sarsfield Bridge on a barge on the River Shannon.

The Royal de Luxe grandmother arrives at Colbert Station in Limerick at 10am today.

For more details on her visit, see royaldeluxelimerick.ie.