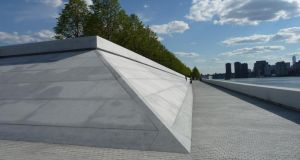 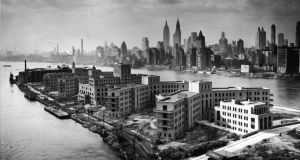 There wasn’t much of a reason to go to Roosevelt Island before now, unless you were among the relatively privileged people living on it. Located in the middle of the East River in New York City, it was called Welfare Island until 1973 and housed an isolation hospital for victims of smallpox.

The Gothic-style hospital, built in 1857 and closed down almost 100 years later, is now a roofless ruin that’s off limits because its structure is unstable. The compelling reason for a visit to Roosevelt Island lies just beyond it: the Franklin D Roosevelt Four Freedoms Park, designed by the great American architect Louis Kahn.

The project involved a radical reordering of the topography of the island’s southern tip, introducing hard edges with sweeping stone-cobbled pathways, white stone parapets and rock armouring all around. It was Kahn’s last project and took almost four decades to realise. Tragically, he died from a heart attack in the men’s room at Penn Station, in 1974, at the age of 73. New York City then ran out of money, and the memorial park was put on ice until $40 million could be raised to fund it, with aid from private donors and foundations.

The New York architect Belmont Freeman is not alone in believing that its completion to Kahn’s original design is nothing short of a miracle, especially in today’s “contentious political, legal and aesthetic climate”, when powerful forces in the US Congress are seeking to dismantle the legacy of Roosevelt and everything he stood for.

“A deceptively simple composition, the memorial park is supreme Kahn, melding megalithic forms from ancient Egypt with modernist minimalism,” Freeman says. “In the end, Four Freedoms Park is as much a monument to Louis Kahn as it is to Franklin Roosevelt – abstract form worthy of the noble abstract concepts that it honours.”

The park’s name derives from a landmark 1941 speech in which Roosevelt looked forward to a world “founded upon four essential human freedoms” – of speech, of religion, from want and from fear. “That is no vision of a distant millennium. It is a definite basis for a kind of world attainable in our own time.”

The words are inscribed on a slab of white North Carolina granite – unfortunately in two pieces of stone rather than a single monolith – that forms the centrepiece of what Kahn called the Room, an extraordinary space, open to the sky, flanked by white granite walls on two sides framing a fine downriver view of Manhattan.

The blocks of stone, each weighing 33 tonnes, are separated by 25mm gaps. In front, on each side is a long stone bench, perfect for sitting in contemplation of FDR’s words. On the obverse, set in a nearly square alcove, is a large bronze of the president’s head that’s weirdly reminiscent of the Wizard of Oz’s.

One can see it in the distance after climbing an expansive flight of stone steps to the sloping parterre, where double lines of lime trees taper towards the monument, drawing visitors to it. The planting is masterfully symmetrical, as is every other aspect of the memorial – including its sharply angular supporting walls.

Perspective is everything, of course, as Kahn had demonstrated with the Salk Institute in La Jolla, California. Seen on a bright sunny afternoon, the overall effect of his Four Freedoms Park is as stunning as Maya Lin’s Vietnam War memorial in Washington DC, even though it lacks the latter’s raw emotional impact. It is all the more powerful because the four freedoms FDR spoke about have yet to be realised everywhere in the world, not least because of the relative impotence of the United Nations right across the river in Manhattan – all the more poignant, given Eleanor Roosevelt’s involvement in its foundation in 1945.

Elegant, minimalist stainless-steel handrails on the main staircase – not included in Kahn’s original design – are the only concession to current obsessions with “health and safety”. The austere formality of the memorial park also contrasts with the relatively naturalistic Southpoint Park, which visitors must cross to enter it.

There is some hope that the ruined smallpox hospital, currently surrounded by railings, may be renovated to provide an interpretative centre explaining who FDR was and the extremely difficult times he lived through, including the Great Depression, the New Deal and, of course, the second World War.