Intrigue, magic, rebels and royalty: a battle for the ages

Why do Brian Boru and the Battle of Clontarf have such an enduring role in Irish history? 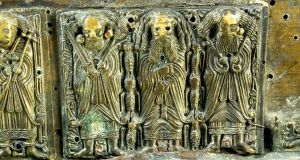 This major battle is probably the best known event from medieval Irish history – and Brian Boru, the high king who was killed in its aftermath, is one of our most famous historical figures. But why is this so?

The Battle of Clontarf was certainly very large by medieval Irish standards, with possibly little short of 5,000 warriors involved. Substantial contingents of Vikings from the jarldom of Orkney and the Isle of Man fought in the battle as mercenaries for the wily king of Dublin, Sitric Silkenbeard.

When these heavily armed and armoured Scandinavian forces encountered the elite soldiery of Munster and south Connacht on the Clontarf battlefield, the result was an intense and prolonged combat from which Brian Boru’s army emerged victorious.

Both sides suffered appalling casualties. We know this from the long lists, preserved in the Irish annals, of those killed from the two armies.

This impression of the battle is also preserved in medieval Scandinavian literature, with the Icelandic sagas – most notably Njal’s Saga – recounting that almost all the Viking warriors who sailed to Dublin were killed.

Although the victory of Boru’s Munster and south Connacht army probably saved Ireland from a substantial invasion by Jarl Sigurd the Stout of Orkney – who may have intended to emulate the conquest of Anglo-Saxon England in 1013 by the Danish king Svein Forkbeard – it was the death of Boru (and many of his close family members, such as his capable son Murchad) that has partly given this battle such an important place in Irish history.

Another major reason is that in the early 1100s, Boru’s descendants commissioned an epic history of his life and the battle, titled Cogadh Gaedhel re Gallaibh – War of the Irish with the Foreigners. Its popularity with the people of Ireland has endured ever since.

This is a wonderfully entertaining tale. There are stories of an evil queen inciting her brother, the king of Leinster, to rebel; a falling out between this king and Brian’s son Murchad as a result of an argument over a game similar to chess; and a recounting of the Battle of Clontarf itself, with supernatural goings-on and treachery of a very high order, when the king of Meath deserts Boru’s army on the eve of the battle.

Most of this material is legendary, although there are probably some nuggets of fact preserved in the narrative.

The story of Brian Boru and the Battle of Clontarf appears to have been a genuine Irish folk tradition. Boru’s rule over Ireland from the mid 970s was exceptionally peaceful. Memories of these times seem to have lived on among the Irish population and were handed down, mainly through oral tradition, over the centuries.

When the 19th-century historian and Gaelic scholar John O’Donovan traversed Ireland during the early 1800s while researching for the Ordnance Survey, he encountered legends about Brian Boru and the Battle of Clontarf all over the island. While travelling among the O’Kellys of southeast Connacht, he heard stories concerning the death of their ancestor King Tadhg Ua Ceallaigh in the battle.

Even in Gaelic parts of Ulster, according to O’Donovan, the three most popular figures in the folklore traditions of the north were Fionn Mac Cumhaill, Brian Boru and Balldearg O’Donnell (in that order).

A home victory
The fact that the Battle of Clontarf was an Irish victory must have contributed much to its subsequent popularity. Brian Boru’s apparently brave personal conduct during the confusion at the battle’s end, when he refused to flee and was killed, also seems to have struck a chord with the people of medieval Ireland.

Many European peoples had similar medieval heroes and traditions, such as Robert Bruce in Scotland, Owain Glyndwr in Wales, Joan of Arc in France and Rodrigo Díaz De Vivar or El Cid in Spain.

Of these, the legend of El Cid is most akin to that of Brian Boru. A historical figure who flourished at the end of the 11th century, El Cid’s actual career was much more complicated than that of simply a Christian hero fighting the Muslim Saracens.

Like Boru, El Cid owes much of his subsequent fame to a piece of literature, in his case the Poema del mío Cid.

The reasons why the Battle of Clontarf holds such an important place in our history are complex, and owe much to oral and literary traditions, and to the history of later medieval Ireland.

This was a genuinely significant event – so important, in fact, that the people of Ireland still haven’t forgotten it, 1,000 years later.

The Battle of Clontarf by Darren McGettigan, is published by Four Courts Press