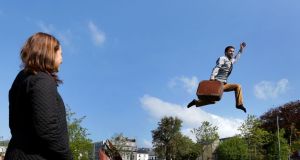 Songwriter Julie Feeney’s first foray into opera, “explosive” South African theatre, Australian circus and a “Big Top Night at the Proms” are among the highlights of this summer’s Galway Arts Festival.

A Mark O’Rowe thriller reimagined for RTÉ Love/Hate actor Tom Vaughan-Lawlor, and world premiere of Olwen Fouéré’s new adaptation from Joyce’s Finnegans Wake will feature among over 190 performances and exhibitions in July.

Fabulous Beast dance theatre will perform Stravinsky’s Rite of Spring and Petrushka, while the South African production of Mies Julie, lauded by London and Edinburgh Arts Festival critics, will be staged.