How equal should we strive to become? 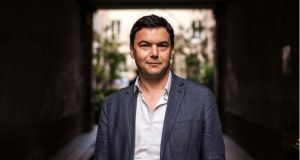 The economic collapse has revived the fortunes of equality, a principle once scoffed at by ruling politicians.

The French economist Thomas Piketty is topping the best-sellers list with his grim analysis of modern capitalism. By delving into the data behind inequality, he has done the same sort of damage to our faith in the markets as social scientists Richard G Wilkinson and Kate Pickett did to our faith in meritocracy through their book The Spirit Level: Why More Equal Societies Almost Always Do Better.

Such research provides fresh momentum to an age-old, egalitarian cause. But what exactly is the philosophical justification for equality? And how “equal” should we strive to become?

Political philosopher John Baker, who taught in UCD for more than 35 years, helping to found both its Equality Studies Centre in 1990 and its School of Social Justice in 2005, has been writing and thinking about equality since long before it became fashionable. And today he is involved in the Basic Income Ireland campaign, which seeks to challenge the status quo in a very practical way.

In a Socratic spirit, he suggests that you should take your lead not from any ideological standpoint but from a careful examination of your own beliefs, and thus he provides today’s idea: Once you endorse any kind of equality, there is a logic that pushes you to endorse equality of condition.

What do you mean by equality?
John Baker: “There are several different definitions or what philosophers call conceptions of equality. The one I prefer is the idea of ‘equality of condition’, which means that people should be relatively equally well off in terms of the social conditions of their lives.

“Those conditions include not just their incomes and other material things, but also the respect they have from others, their power in society, the love and care they experience and have the opportunity to give to others, and the quality of their working and learning experiences.”


What’s the best argument for equality?
“I’m not sure that it is all a matter of argument, because most people’s belief in equality comes from their recognition of the value of other human beings, and I’m not sure that you can argue anyone into that if they don’t get it already. Once you do see others as valuable, then it’s hard to come up with any argument to show that they are any less valuable than you are or that their lives matter any less.


Is egalitarianism a fixed, or universal, belief system?
“Since there are several different conceptions of equality, the real question here is which of these is the best one to believe in. My view is that once you endorse any kind of equality, there is a logic that pushes you to the more radical idea of equality of condition.

“For example, suppose you think that everyone has certain very basic human rights, which is itself an egalitarian idea. Once you start thinking about how inequalities of condition contribute to the violation of those rights, you are on the path to equality of condition.”

Is it sustainable to advocate equality in a whole range of things at once? Equality in opportunity, for example, would seem to involve inequality in income.
“Generally, my view is that the different elements of the egalitarian programme are consistent with each other, so there is no theoretical problem with advocating equality across a whole range of issues. There are also practical advantages in working with a range of issues. For one thing, it helps in trying to build coalitions of all the social groups that do badly from inequality. For another, it emphasises the links between, for example, inequality of resources and inequality of respect.

“On the specific issue of equal opportunity, it all depends on what you mean by equal opportunity. If all you mean is that people shouldn’t be discriminated against in certain ways in the competition to climb ladders of inequality, then that idea is premised on there being substantial inequality of condition and there’s a clear distinction between two conceptions of equality.

“But if you understand equal opportunity in a deeper way, to mean that people’s lives should not be held back by the circumstances of their birth, then it’s clear that that’s only possible in a society where the circumstances that people are born in and brought up in are relatively equal.”


Campaigners have latched on to The Spirit Level as strengthening the cause of egalitarianism, but isn’t there a risk to lending the book’s arguments such weight? What if research emerged showing unequal societies delivered better health, education or economic outputs? Does the argument for equality then fall?

“I agree with your point here. The core case for equality is not based on the overall social effects of inequality on health, education and so on, but on the idea that every one of us should have the prospect of a good life. But the social science here isn’t irrelevant to the case for equality.

“For example, for generations the opponents of equality have argued that inequality is good for society as a whole, primarily because it fosters economic growth that benefits everyone. The real power of Wilkinson and Pickett, in my view, is that it exposes that argument as baseless.”


Have people universal entitlements, and if so, on what basis?
“I think it is widely agreed that people have universal entitlements to a lot of different things, like the right to vote, the right to free speech, access to clean water and sanitation, protection by the police and the courts, a decent education, and so on. It’s a natural extension of those ideas to say that everyone should have enough income to live a decent life – what’s called a basic income.”


How would such a scheme be funded?
“Basic income is actually much less costly than it may appear to be. In terms of income, for most people, you can think of basic income as just a different way of classifying their income. The big difference from the present system is that basic income is nearly unconditional, based only on residence requirements. That gives people a lot more freedom to move out of, but also into, paid employment.”

Question: Where can I find today’s Socrates?


José Mourinho replies: “At this moment, football is full of philosophers . . . people with fantastic theories and philosophies. It’s amazing. But the reality is always the reality.”