The story of Margaret Skinnider, shot three times and then refused a pension because she wasn’t a man, is one of many showing risks women took in the independence fight 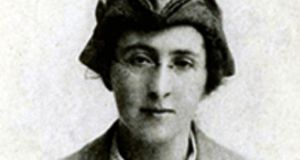 Margaret Skinnider: one of over 200 members of Cumann na mBan whose applications are contained in the archive.

A woman shot and injured while in command of five men during Easter Week 1916 was refused a pension because the law was “applicable to soldiers as generally understood in the masculine sense”, records from the Military Pensions Archive show.

Margaret Skinnider was one of more than 200 members of Cumann na mBan whose applications are contained in the archive. The files outline the women’s injuries, the risks they took and their heavy involvement in military action during the 1916 Rising and and the Civil War.

When Skinnider applied for a military pension in 1925, the Army finance officer sought legal advice because, as he wrote in a letter to the treasury solicitor, the definition of wound in the Act “only contemplates the masculine gender” and the references to “any person” is “referable only to the male sex”.

She received “two gunshot wounds in shoulder and one gunshot wound a quarter inch from spine” she wrote in her application in 1925. She was also involved in the Civil War and was imprisoned for possession of a revolver in Christmas 1922 until October 1923. She served as quartermaster general of the IRA for a period during the Civil War when she was involved in communications and purchasing arms.

Despite her proven injuries and level of involvement, the legal advisor to the Army pensions office wrote that he had “no doubt” that her application “cannot be considered under the act” even though, he writes, the words referring to masculine could be interpreted as feminine.

Skinnider is not given a reason for her refusal in a letter from the army pensions office. When she questions why her application was not admissible, the Army pensions office replies that the 1924 pensions Act “is only applicable to soldiers as generally understood in the masculine sense”.

Skinnider wrote to the pensions office again in 1927 to say she was “advised that this procedure was wrong” as she was a member of the Irish Citizen Army when wounded.

After a new, widened military pension Act was introduced in 1934, she applied again and was eventually granted a pension in 1938.

A handwritten note from Éamon de Valera is used to back up an application by another Cumann na mBan member who was prominent in the Rising. Trained nurse Linda Kearns MacWhinney made her application under the new law in 1934.

Her file shows the level of risks taken by women involved in the struggle. She wrote of transporting guns from Hardwicke Street to the GPO and fighting “all through Easter week”.

Unusually for a woman, she was considered an IRA brigade officer and would carry messages from the supreme council to the Sligo area.

Planned attack
She was arrested for arms possession in 1920 for driving herself and three other members of the IRA with arms and ammunition for a planned attack on British forces, the files show. She was given a 10-year penal servitude sentence but escaped from Mountjoy in 1921.

Her file contains a handwritten note from Éamon de Valera saying “please admit nurse Kearns”. De Valera wrote a letter for her application to verify that he wrote the note to allow her to pass communication between himself and Thomas MacDonagh. He sent her to Australia and the US in 1922 and 1924 on a “national mission”.

Revolutionary leader James Connolly’s aide-de-camp, Winifred Carney, was another captain of Cumann na mBan to apply for the pension who had also been jailed. She was with Connolly in the GPO and retreated with the garrison to Moore Street, and was jailed until Christmas 1916.

As president of Cumann na mBan in Belfast she helped volunteers to “pack ammunition into potatoes” and carried messages in and out between prisoners Austin Stack and Michael Collins.

The files released by the military archives contain hundreds of untold stories of Cumann na mBan members which helps to highlight as never before the major and central role of women in the struggle for independence.