An Irishman’s Diary about a real-life literary whodunnit 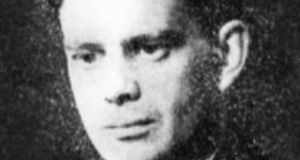 “An early suspect was Valentin Iremonger. The short-lived but infamous Kavanagh’s Weekly of 1952 had included a typically savage attack on the Irish diplomatic service, from which Iremonger – later the ambassador to India – might have suffered collateral damage.”

I had to speak this week at the launch of an anthology of poems by Valentin Iremonger, the writer and diplomat well known in Irish literary circles during the 1950s and 1960s, but since somewhat neglected. The event reminded me that this year is the 60th anniversary of a certain famous libel trial, and a still-unsolved mystery.

The trial centred on another poet, Patrick Kavanagh, who in 1954 took an ill-judged action against a journal called the Leader over an anonymous profile of him it had published. A media sensation, the case nearly broke Kavanagh, physically and mentally. It would have broken him financially too, if he hadn’t been broke already.

An early suspect was Iremonger. The short-lived but infamous Kavanagh’s Weekly of 1952 had included a typically savage attack on the Irish diplomatic service, from which Iremonger – later the ambassador to India – might have suffered collateral damage.

But the paranoid Kavanagh saw suspects everywhere. As his biographer Antoinette Quinn wrote, he “wanted Behan [Brendan, by then a deadly enemy] in the frame too”. And several other names were mentioned. Yet despite the claustrophobia of 1950s Dublin, where the protagonists circled each other like Siamese fighting fish, the profile’s authorship was never revealed.

The trial went ahead anyway, greatly enlivening Irish life for a period, and Kavanagh lost. In a dramatic twist, two months later, the defence lawyer who had eviscerated him, John A Costello, became taoiseach. The guilt he felt about the case (even lawyers have consciences, apparently) would henceforth be useful to Kavanagh, who in general now wore a cloak of martyrdom in the public eye.

The saga also increased his all-round notoriety, thereby advancing his ambition to replace Yeats as the most prominent Irish poet – “Ard-Fhile” in Anthony Cronin’s term – a status he achieved in the end.

Iremonger, by contrast, was “the quiet man of Irish 20th century poetry”. Or so suggests Seán Haldane, the English-born, Irish-reared, Canadian-resident publisher who was behind this week’s launch and is on a mission to redress Iremonger’s neglect.

Haldane’s mission is much broader than that. His Rún Press aims to publish complete anthologies of poets whose work has not been so collected before, and to do this in what the Germans call Taschenbuch form – handsome hardbacks that are nevertheless small enough to fit in pockets.

Iremonger is one of the first to benefit, but Haldane’s ambitions are international. Thus, this week, he simultaneously published the poems of English writer Martin Seymour-Smith, better known for several other genres, including his history of “Fallen Women”, the sort of subject that sells much better than poetry.

A retired neuropsychologist, Haldane is a poet and also an accomplished crime novelist. He is currently short-listed for the Canadian Crime Fiction awards thanks to The Devil’s Making, “a Victorian detective mystery”. Which takes us back, neatly enough, to the unsolved case of the Leader libel trial.

Among those to have identified fingerprints at the scene of the profile was fellow poet John Montague, who, knowing all the suspects, once conducted the experiment of reading the piece aloud to see if it reminded him of anyone. It was, he decided, the “terse, intelligent, caustic” voice of Iremonger.

Whether he was right about that, Iremonger’s terse, intelligent voice can be heard throughout his collected poems.

The book was launched, by the way, in Baggotonia – the breakaway Bohemian enclave of Dublin founded by Kavanagh and others in the 1950s. Among those attending were the secretary general of the Department of Foreign Affairs in neighbouring Ireland, along with former diplomatic colleagues of Iremonger, and three of the poet’s daughters.

I suggested that such an elite gathering must have high-quality intelligence that could yet lead to a breakthrough in the Leader case, and urged anyone with information to come forward. Sure enough, a smiling woman approached me afterwards and said she knew the whole story. Then, heading for the doorway, she added: “But I’m not telling you.”

The strain is starting to tell on Brendan O’Connor
3

‘There is something very cool about Irish people’
7

Johnny Logan: ‘Dickie Rock is a legend in his own head... He lives in a fantasy world’
9