A find of treasure with huge archaeological and historical significance has been unearthed under Rathfarnham Castle in Dublin as excavation works were taking place to install a lift shaft. Video: Niamh Guckian 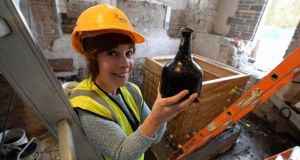 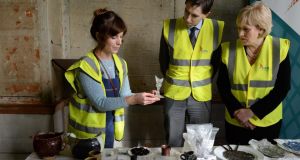 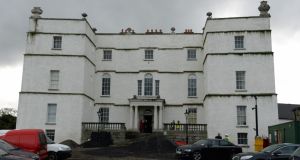 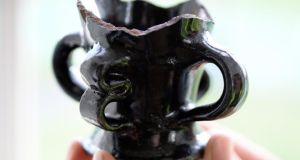 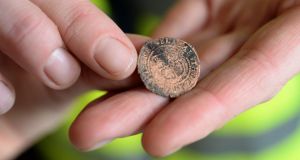 Archaeologist Alva MacGowan with a 1602 Elizabeth 1st Irish penny, part of a large hoarde of objects from the 17th century discovered in a pit during the construction of a lift shaft at Rathfarnham Castle in Co Dublin. Photograph: Frank Miller / The Irish Times

A near perfect hoard of 17th century artefacts has been discovered in an underground lair of Rathfarnham Castle, revealing intimate details of the lives of the family who lived there and wider Irish society during that period.

The hoard was discovered about a month ago by construction workers installing a lift shaft at the castle. It was found in a sealed lair between two stone floors at the bottom of one of the castle towers.

Alva MacGowan, find supervisor with Archaeology Plan, the organisation commissioned by the Office of Public Works to deal with the hoard, said the “absolutely superb” preservation of the artefacts was “every archaeologist’s dream”.

Among the items discovered was a foldable toothbrush, clay pipes, jewellery, porcelain, coins, chamber pots, crystal goblets, as well as wine bottles and ointment jars with as of yet unknown liquids inside.

It has been said Oliver Cromwell and his men held council at Rathfarnham Castle as they besieged Ireland, and the discovery of a Cromwellian armour breastplate with a musket-hole through it “ties in with that”, said Ms MacGowan.

The castle was built in 1583 by Lord Adam Loftus who was Archbishop of Dublin. The materials discovered are dated the mid to late 17th century and belonged to his descendants.

The hoard paints Rathfarnham Castle as a “party house” and those who lived there as an “elite, wealthy, and extremely fashionable” family, said Ms MacGowan. “The castle wasn’t their primary residence. They would have done all their entertaining and partying here.”

Glass wine bottles were first produced in England in 1650. Some of those discovered here are some of the earliest, and were stamped AL 1688, which refers to Lord Adam Loftus, a descendant of the Archbishop who died at the siege of Limerick in 1691.

“Most of the material here was imported,” said Ms MacGowan. “The family had a lot of contacts with the royal courts in England so they would have gone to London, seen the fashion, and brought it all back to show off to all of their neighbours and friends.”

The castle was originally fortified and as it lies on the outskirts of Dublin it would have been subject to attack on several occasions. A selection of musket balls and lead was also discovered.

Remarkably, the organic remains of foodstuffs including cherry pips, apricots, crumbs, peaches, and tea leaves were also preserved. “Tea was only introduced in England in 1650,” said Ms MacGowan. “They correspond with the porcelain tea sets imported from China. The family were importing high luxury goods from all over the world, which shows Ireland wasn’t as cut off and unfashionable as we might think.”

She said the items in the hoard may have been discarded by the family. “They may have been stashed away and then whoever hid them was killed,” she said. “It also could be that they were just so wealthy that they got rid of them because they weren’t in fashion anymore.”

Minister for Arts and Heritage Heather Humphreys said she hopes the hoard will ultimately be preserved and displayed at Rathfarnham Castle. “When you can connect the pieces with people and know the story around the people that makes it so much more interesting,” she said.

“It’s amazing that you can see someone’s initials on a spoon and connect that to a person. These things were part of a living household.

“The collection is going to be preserved. There should be a display here because I think it’s important when you find things like this that they are put back where they belong. There is a real sense of what they were about when you do that.”

Minister of State with responsibility for the OPW Simon Harris said it was an “invaluable find”.

“It’s really interesting and exciting to see this place not just as a building but as a home,” he said. “To be able to find out more about the people who lived here by finding some of their very personal belongings really brings the castle to life.”