Two Borderlands titles get the next-generation console treatment, and remind us just how vast and fun this series is 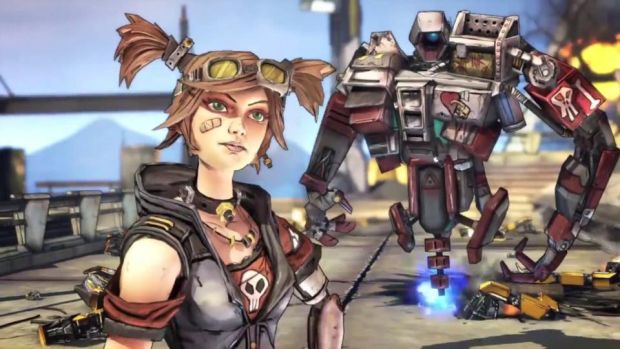 Available on: Playstation 4,Xbox One

If we lived in a fairer world, Borderlands would be bigger than Call of Duty and Grand Theft Auto; millions of fans would cram into game shops at midnight around the world every time a new Borderlands game came out; and its name would become shorthand for popular games in the mainstream media. The franchise – which is open world-shooting for the most part – is popular, but deserves to be world-conquering.

The Borderlands franchise look good, but never got involved in the graphics arms race with its competitors. While the likes of Far Cry and Call of Duty poured more and more resources into trying to create cinematic graphics, Borderlands went another route – choosing instead to resemble a violent, animated comic book. Its relatively low-key appearance might render this re-release for new consoles moot, but it does more than enough to warrant every one of the five stars beneath its name.

The Handsome Collection comprises Borderlands 2 and Borderlands: The Pre-Sequel, both of which feature the hero and villain (depending on the game you play), Handsome Jack. The collection lives up to its name, with marginally but recognisably sharper graphics that exploit the new machines’ HD horsepower.

The cross-save warrants a paragraph of its own. Part of the appeal of the Borderlands games is their scope and range, so if you’ve ploughed 40 hours or so into Borderlands 2 on your Xbox 360, you’d want to be able to continue that same campaign on your Xbox One. Thankfully the cross-save (using the cloud) works perfectly and intuitively, so it’s easy to pick up where you left off.

As always, the gameplay is the main attraction here. Borderlands 2 and Pre-Sequel are hilarious, thrilling and vast open-world shooters, bursting with memorable characters, exotic locations and rich gameplay. There are dozens of gun options with countless trimmings – flammable ammunition, magazines that fire from your gun and explode when emptied, guns that freeze or electrocute enemies, and so on. As your enemies rush towards you, you must switch between weapons in split-second time, matching the ammunition type to the enemy.

During the game you level-up, role-playing game style, and alter your character according to how you like to play. Although the campaigns have hectares of content, with countless side missions in the vast open world, it’s also got fine multiplayer options, with cooperative and competitive gameplay. The side-missions, meanwhile, are witty and imaginative self-contained stories, even though they usually work within the parameters of finding something and killing it.

Few franchises have the colour and quirk of Borderlands. Even the talking vending machines are funny, barking rhetorical questions such as “Why loot the dead when you can buy from me?”

Violent, slapstick, action-packed and with dozens of hours of content, The Handsome Collection is essential, regardless of whether you’ve owned these titles before. This collection is more than just a pretty face.

Writing against the current: challenging the precedent in unprecedented times

Dinner in America: cringe-making firecracker of a comedy