It is a great challenge to get by as an artist in the Gaeltacht. So why is it that so many cannot bring themselves to leave? 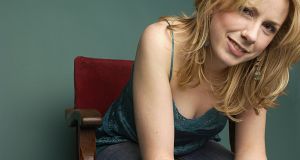 “I call this place ‘An Res’, as in the reservation,” says Muireann Nic Amhlaoibh, a traditional singer and flautist based in the Corca Dhuibhne Gaeltacht on the Dingle Peninsula.

“It’s a little bubble of Irish culture. I always felt like there was something missing when I was working in other places. What I missed were the mountains and the ocean, but most of all it was the language, the way we communicate. It’s a slightly different way of thinking. Everywhere else I lived, I was always a bit of the quare one, a sense of ‘she’s from the Gaeltacht and she speaks Irish’. Around here, everyone is just a bit strange and that’s great.”

Ríonach Ní Néill was a salaried dancer and choreographer with a pension and eager audiences in Germany’s oldest dance theatre when she was overcome with the dream “of living and working in my mother tongue”. She moved to Connemara and immersed herself in a new life.

“Of course, it’s career suicide for a contemporary dancer to move to the Gaeltacht. There isn’t another practitioner within 40 miles of me, and contemporary dance isn’t exactly in the canon of Irish traditional arts. But, that said, there’s a general acceptance of art being just a normal activity and part of life here, and that’s incredibly rewarding. You can’t throw a stone around here without hitting an artist – the postman is a flute player, the sheep farmer is a sean nós dancer, and so on. An artist is just part of the mix.”

Nic Amhlaoibh agrees about the openness to artists in the Gaeltacht. “Some are here because of the beauty of the landscape or the tourist industry, but many are genuinely interested in working through the medium of the language or with the language. I’m a traditional musician primarily, but even if I’m composing new music it is all based on the sound and musicality of the language.

“As a singer I really love the use of vowels in Irish. I love how open it is. It is quite forward in the mouth and it lets out the voice and it is just the most musical soft easy language to sing in. When I switch back to English it just feels clunkier.”

Earning a living as an artist is hard anywhere and the Gaeltacht is no exception. Darach Mac Con Iomaire from Dublin has managed to make his career as a writer and director for theatre and television almost exclusively through Irish in the Gaeltacht, but he points out how precarious this is. “The only way I managed to write Corp + Anam [his TG4 crime-thriller series] was because of a one-off scheme in which Údarás na Gaeltachta and TG4 paid 10 writers for two years to write. Suddenly, I didn’t have this loaded gun at my temple: be creative, earn money. Only for that I’d probably be back teaching again.

“It is actually impossible to earn a living as a professional writer in this country, except for the very few. But if the Government are serious about keeping the Gaeltacht alive they need to fund artists. There’s so much talent here and it’s totally wasted because there are no professional structures to create employment, beyond TG4.”

Nuala Ní Fhlathúin, an artist from Lettermore with an MFA in sculpture from the University of Washington in Seattle, agrees, pointing out that “a lot of the projects I do in the Gaeltacht I give my time for free, or practically for free. It’s fine to work like that for a year or two, but after a while you burn out.”

She appreciates the support she gets from Ealaíon na Gaeltachta, an organisation part-funded by the Arts Council and Údarás na Gaeltachta. However, “their funding has been reduced dramatically and the amount of bursaries they give out is very small,” she says. “ I’ve chopped and changed and shifted my practice to make it feasible to work in the Gaeltacht because I want to make art for and with my local community rather than an art market elsewhere.”

For the last five years Ní Fhlathúin has been based in Cois Fharraige and she says “the Gaeltacht has shaped every aspect of my art practice, from ancient rituals of Lá an Phátrún in Baile na hAbhann to the new and lively Traidphicnic festival in An Spidéal”.

“The landscape here has been heavily romanticised and idealised by the Irish Revival movement of the early 20th century. For many people it’s a semi-mythological place, a touchstone for literary, artistic and political depictions of Irishness, and yet the land itself is impervious to all that. The reality is that it is home to communities affected by high emigration rates and poor infrastructure, a place where the language is struggling. It was only when I tried to explain my minority language background to people in the US and was met with incomprehension that I realised how important Irish was to my work. I realised that I would have to base myself in the Gaeltacht rather than making work about it from an isolated urban studio.”

Do reports of the Gaeltacht’s demise have an impact on the artists? “I read the same articles as everyone else about the decline of the Gaeltacht and they are frightening,” says Ní Fhlathúin. “But at the same time I see how strong the language is all around me in the community and it seems impossible that it would disappear.”

Mac Con Iomaire agrees, “Sure Máirtín Ó Cadhain was predicting the same thing 40 years ago. The biggest challenge in terms of the Gaeltacht and the Irish language is when you have a family, knowing that going back 800 years they’ve been speaking Irish and making sure that the practice remains unbroken on my watch. It’s a responsibility that I cherish and protect.

“But although the Irish language is integral to who I am and a very conscious thing in our family, really it’s just a means of communication. I don’t create work in Irish in order to prop up the language. I am committed to the Gaeltacht as a concept but I don’t feel a burden of obligation to it in terms of my art.”

Nic Amhlaoibh likewise tries not to feel obliged to safeguard the Gaeltacht. “I’m not that interested in this big ‘Ar son na cúise’ [for the sake of the cause] thing that I grew up a part of. I don’t want to keep fighting and I don’t want my kids to grow up fighting, I just want to enjoy it and celebrate it, and whatever comes out of that so much the better. There’s such a lovely vibe we have here, a vibrant melting pot of young families and musicians that it makes you feel it is not so doomed. Maybe, I’m just in a bubble.”

Ní Néill believes the struggle for survival in some ways helps animate the Gaeltacht. “The existence of a Gaeltacht nowadays is only possible by the conscious decision of its residents to keep it alive, and to go against the flow. And so I feel that here I live in a community of cultural producers, not passive consumers. You spend a lot of time as an artist asking yourself why you are doing it, when there are easier and more lucrative ways to make a living. The simple answer is that there is more to living than making a living – and I think the Gaeltacht would give the same answer. Around here people are not just measured by their economic worth or use, but by a much broader range of values, such as identity, history, community, beauty – because Irish really is such a beautiful sounding language – and what they give back.”

It’s clear that the Gaeltacht is still a source of inspiration for many creative people, and yet the reality is that many of the most prominent and accomplished Irish speakers are now forced by economic necessity or practicality to be based in cities. The likes of Nuala Ní Dhomhnaill, Liam Ó Maonlaí, Biddy Jenkinson and Liam Ó Muirthile maintain strong connections to a particular Gaeltacht and regularly return, but all make their homes in cities. It was the same for the previous generation of Ó Cadhain, Seán Ó Ríordáin and Máire Mhac An tSaoí, who wrote yearningly about the Gaeltacht from the city.

Many Gaeltacht-based artists are amateur part-timers, who would not have a significant profile beyond their local area. There are also many full-time professional artists who yearn to live as creative artists in the Gaeltacht, such as Eoghan Mac Giolla Bhríde, but it is simply not economically viable for them to do so.