Yorgos Lanthimos’s poisonously effective film may be about the tyranny of coupledom, or it may not... 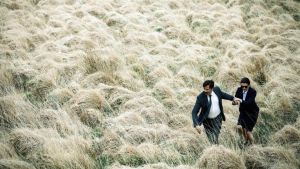 Speaking after the press screening of his treacle-black absurdist comedy, Yorgos Lanthimos denied that the film had any specific messages or was putting forward any particular criticisms of society. One thought of dissident playwrights from the Soviet era who publically laughed at the notion that their oblique stories could be read as allegory. Really?

This hilarious, unsettling Irish co-production – largely filmed in Kerry – has surely something to do with the pressure placed on citizens to form neat, well-matched couples. Colin Farrell plays an architect dispatched to a remote hotel for a terrifying period of ritual ordering. Enthusiasts for Lanthimos’s Alps and Dogtooth will expect to be taken to another, even more frightening world.

So it proves. A coolly efficient Olivia Colman clarifies what the guests already know: if they fail to form part of a couple within 40 days, they will be turned into the animal of their choice and set free. Farrell, whose brother accompanies him in the form of a dog, reckons that, should he fail, he will elect to become a lobster. Colman further explains that, if relationships falter, the partners will be “assigned” children to distract from the tension.

In this universe, couples stick religiously to the notion that they must have “something in common”. So, one fellow cracks his nose to convince a potential mate that he too gets nosebleeds. In the film’s most impressively savage sections, Farrell – whose fine performance dovetails Father Dougal with Josef K – pretends to be a more ruthless misanthrope than the hotel’s most unpleasant guest.

If the picture is about the tyranny of coupledom (and we’ll pretend to take Yorgos’s word that it isn’t) then it offers a complementary treatise in the form of the fanatical “singles”. Headed by a dictatorial Léa Seydoux, this guerrilla faction hide in the woods, dance alone to electronic music and inflict terrible torture on anyone caught kissing.

The first two-thirds of The Lobster are properly funny in a way Lanthimos’s earlier films couldn’t quite manage. We are in a Nowhere, but the site of Colman and Garry Mountaine delivering a showband version of Something’s Gotten Hold of My Heart will send a chill down many domestic viewers’ spines. It is also spookily beautiful. Thimios Bakatakis, the director’s usual cinematographer, draws sinister shades from the countryside and makes dislocating use of extreme slow motion.

The piece does loose a bit of steam in the later stages when we move away from the core locations. But this remains a poisonously effective work from an utterly singular director. You walk out feeling ever so slightly changed by it. There are few higher compliments.

The Lobster plays in the main competition here at Cannes and should contend for prizes.