Suspiria: The dullest coven on the face of the Earth

Review: Remake of Dario Argento’s 1977 classic does nothing with its many good ideas 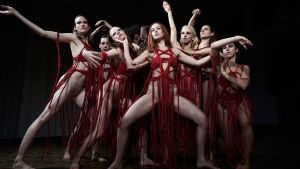 Luca Guadagnino’s follow-up to Call Me by Your Name is a truly remarkable piece of work. Reworking, remodelling and regurgitating random swatches of Dario Argento’s most famous horror film, the director has, despite the richness of the cloth, managed to fashion a garment of implausible dullness. Rarely has something so revolting (I mean that bit as a guarded compliment) proved so soporific. The current Suspiria is always on the point of becoming interesting, but it never fails to squander that potential. Some cranks will nonetheless love it. I pass them my best wishes.

Guadagnino sets his film in the year that Argento’s wonderfully lurid classic was released. It is 1977 and Susie Bannion (Dakota Johnson), a girl from the Midwest with a Mennonite background, has turned up for audition at a dance school by the Wall (where else?) in West Berlin. She is accepted and she succeeds. But it soon becomes clear that something bizarre is afoot. Madame Blanc (Tilda Swinton), the main choreographer, is one of several witches, and the troupe is a cover for the most appalling supernatural outrages.

We could fill whole newspapers with the underexplored points of interest here. We might even arrange them in some sort of lucid order, but if Guadagnino can’t be bothered, then why should we? The background chatter about the Red Army Faction goes nowhere very interesting. The early suggestions that the film may tie the tortures of dance to meditations on mortal suffering are not followed through. The stunt casting of Swinton as an elderly male psychiatrist – shrouded by an absurd pseudonym in the cast list – only serves to remind us how much more interesting Tilda is when playing a variation on herself. Stay awake for the empty invocation of The Scarlet Letter (if you can be bothered).

The director’s superficial visual elan does just about hold the thing together. Scored to a fine, nervy score by Thom Yorke – not the equal of Goblin’s from the original, but what is? – the film rejoices in the juice and agony of its horrors. Like Park Chan-Wook’s excellent, current TV series of The Little Drummer Girl, Suspiria has great fun heightening the bold colours of a decade the camera loves. But nothing this incoherent can hold the attention over 152 barely connected minutes. A waste of good ideas.