Rojo: A South American Colombo in a bravely staccato film 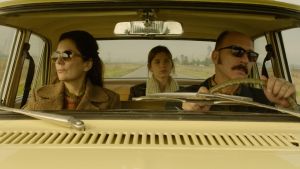 Benjamin Naishtat enjoys putting the camera below the dashboard when watching his characters drive.

There has emerged a school of South American cinema that uses oblique disquiet to deal with the tyrannies of the last century. The Chilean director Pablo Larraín has been particularly adept in creating corrupt universes in which totalitarianism eats away at every corner of normal life.

Nothing functions quite as it should. These are not exactly surreal worlds, but every step is taken on unstable ground.

Benjamin Naishtat, one of Argentina’s great younger hopes, moves from experimental work to something a little more conventional here, but Rojo remains an awkward film that demands patience from viewers. Genre tropes abound. Few of them lead where the viewer expects.

A long opening chapter takes us to credits and then – after about 20 minutes – to the title itself. It is the mid 1970s and Claudio (Dario Grandinetti), a provincial lawyer of only modest slipperiness, is meeting his wife for dinner in an average restaurant. He has an encounter with an eccentric, difficult younger man that leads to something like manslaughter.

You’ve had this before. We see a crime being committed. We wait for the detective to turn up and nag the culprit towards guilt. The comparisons with Columbo cannot be entirely accidental.

Naishtat, like directors of that show, enjoys putting the camera below the dashboard when watching his characters drive. He gives us a stage magician – complete with drum roll – that recalls the classic episode Now You See Him. Most conspicuously, Claudio is eventually confronted with a detective, much seen on Chilean TV (Alfredo Castro), who won’t leave him alone to process what little guilt he feels.

The cop doesn’t much look like Peter Falk, but he does, after an interview, swivel back to ask “one more thing”.

None of this happens, however, for a good hour into a bravely staccato film. To that point, we have encountered numerous variations on the mechanics of disappearance.

The first scene finds a number of people leaving a house that will later play a part in the plot. Such empty properties abounded during the dictatorships – often the result of political abductions – and, as the film explains, were often finessed dishonestly into the hands of the already wealthy.

Later, the normalisation of the political disappearance looks to have an influence on a dispute between young people that, in another environment, might lead to nothing more than handbags at dawn.

Rojo is persistent on the poisonous nature of corruption and oppression. Yet most of those pressures are happening in deep background. There is discussion of the coming coup and a feeling of unease at the corner of all conversations, but this is not a film about rampaging police officers or doomed rebels.

Much of the burden for getting across the otherness falls on the shoulders of Dario Grandinetti. Allowing no great emotion to leak through his stoic features, the actor gives us a man who is too lazy to jump the tracks that lead towards the wrong action for the wrong (or no good) reason. It’s an internalised performance that invites some sympathy but very little empathy. That’s how these films work.

There is something of Peter Strickland – director of In Fabric and The Duke of Burgundy – in the film’s take on contemporaneous techniques: zooms, saturated colours, bold red credits over continuing action. But Naishtat is less at home to playfulness than that English director.

At times the academic, arms-length nature of the exercise proves exhausting. Certain sections cry out for a little more forward momentum. There is, however, always enough going on to encourage a little more effort from an indulgent audience.

Meanwhile, we still wait for that Mark Ruffalo Columbo reboot we haven’t exactly been promised.