‘Ready Player One’ is no Spielberg masterpiece 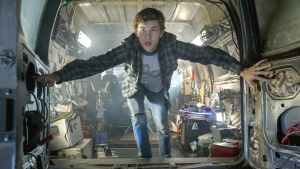 An argument can be made that Steven Spielberg should stick to popcorn pictures. For all the virtues of Schindler’s List and Lincoln, it was Jaws, ET and Raiders of the Lost Ark that changed the direction of popular culture.

Who’d pick Amistad over Close Encounters of the Third Kind?

And yet. In recent years, decent white-bread pictures such as The Post and Bridge of Spies have been more common than classic Spielberg auditorium crammers.

After the damp splutter that was The BFG, Ready Player One seeks to blast the great entertainer back into noisy, wonder-struck mayhem. Based on a fun, pulpy novel by Ernest Cline, the picture certainly seems like an ideal fit.

Everywhere we look we see 1980s iconography. There’s a bit of Back to the Future here. There’s a bit of Jurassic Park over there. This is, of course, the world that Steven Spielberg helped create. Cline can have hardly dared imagine that the movie would end up in these hands.

Taking place mostly among interlocking computer-generated realities, Ready Player One makes a virtue of its own mounting chaos. This is not a film for those who are at home to enough.

A terrific early chase finds the hero racing his Delorean (no further explanation required, surely) through a futuristic city while – the original batmobile jostling for position – King Kong and a Tyrannosaurus Rex seek to smash the vehicle into iron filings. Can it be possible to sustain this level of energy?

Not really. Ready Player One is a grand act of stage management, but it lacks the clean narrative punch of Spielberg’s early masterpieces. In those films, every scene led inexorably to a late moment of awe-inspiring revelation.

By the close of this undeniably entertaining, madly overlong film, we’re too battered to appreciate our reward. The talented, charming young actors may rock back like Eliot before ET, but the rest of us are shaking the noise out from our inner ear.

The story deals with a future that has already arrived. Wade Watts (Tye Sheridan) seeks escape from life with his harassed aunt (hello, lovely Susan Lynch) and her abusive boyfriend (Ralph Ineson) by dropping into a vast virtual reality known as Oasis. A headset, modified clothing and flexible treadmill allow him to experience complete immersion.

Some time before the story begins, the late creator of the Oasis (Spielberg-regular Mark Rylance with stagey American accent) has established a competition. Find three keys, solve three puzzles and control of the Oasis will be yours.

Playing as Parzival, close friends of the burly Aech, the gifted Wade has to compete with corporate drones as well as other players. But we suspect he’s up to it.

Spielberg has a problem with his representation of the online world. Computer graphics are now so advanced that, by 2045, when the film takes place, they will surely have achieved total photo-reality. Yet Parzival and Aech come across like characters from early noughties incarnations of, respectively, Final Fantasy and World of Warcraft.

Then again, retro-addiction is one of the film’s themes. Perhaps these mid-century teens rather like that old-school look. Even before the film’s release, online sceptics have been making smart remarks about “Member berries”: South Park’s term for cheap nostalgic triggers that avoid any reference to earlier eras’ less lovely aspects.

The film seeks to have other cakes that it also wants to eat. At its best (to adapt a simile often used as criticism of such films) Ready Player One is like watching a really gifted gamer play the later levels of a great game that you will never be good enough to reach. That can be fun.

But the ultimate lessons are, inevitably: don’t live in the past and don’t spend too much time on your computer. Go outside. Kick a ball about. Get yourself a girlfriend.

Don’t roll your eyes at me, young man.

Reader Player One is in cinemas from March 30th

Colson Whitehead: ‘I lacked imagination to conceive how terrible Trump would be’
9