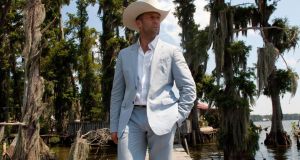 More disposed to comic crime when writing under his own name, Westlake also composed an excellent series of hard-boiled novels under the pen-name Richard Stark. Film enthusiasts will have fond memories of John Boorman’s peerless 1967 adaptation of Stark’s Point Blank. The new film finds Jason Statham belatedly taking over the reins from that film’s impeccably granite-faced Lee Marvin. We like you, Jason. You’re perfectly acceptable in near-silent, pseudo-Asian action nonsense. But you, sir, are no Lee Marvin.

To be fair, Parker starts well enough with a heist at a state fair. As the gang are leaving the scene, the amoral, ruthless Parker – hired by a near-catatonic, barely intelligible Nick Nolte – falls out with his slippery co-conspirators and is left for dead by the roadside. He rises again to exact boring revenge.

The remainder of the film, for reasons too tedious to relate, finds Parker stomping around a soulless corner of Florida with budding estate agent Jennifer Lopez. Fierier chemistry results from attempts to make water react with more water.

Lopez, a better actor than many allow, strives purposefully to create romantic friction with Statham, but her part is so underwritten and the English actor so deadened that she ends up coming across like her desperate, needy fist-puppet in that South Park parody. Statham, mean- while, unintentionally clarifies that it takes only the slightest twitch up the cinematic keyboard to place him beyond his quarter-octave range. It’s like watching a horse playing Coriolanus.

The most divertingly puzzling moment in this insanely overlong film arrives when Statham is required to attempt a Texan accent. Is he playing somebody who can’t hit the vowels, or can the actor himself not actually master the dialect? It’s worth pondering. You need something to keep yourself awake.