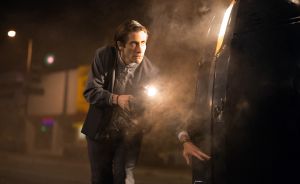 The best moment in this beautifully sinister LA noir finds Rene Russo, producer at a news station, asking her more scrupulous colleague if it is okay to broadcast a particularly gruesome piece of footage. “You mean morally?” he asks more in hope than expectation. The “yeah, right!” look that Russo slings him – she is only interested in potential legal issues – succinctly conveys the trough into which we have sunk.

One evening, Bloom (surely named for the hero of another city saga) happens upon a traffic accident and takes note of the freelance crew filming the aftermath. “If it bleeds, it leads,” the cameraman explains. Now, this is a business with which the cold-eyed, friendless Bloom can connect. Before too long, he has bought a cheap camera and has begun listening to the police radio. Utterly amoral, ruthlessly efficient, he captures gruesome footage that may help save Russo’s struggling network.

As an LA myth from the school of Michael Mann, Nightcrawler works quite brilliantly. Filmed both digitally and on film, the picture takes place in a glassy light that emulates Bloom’s psychological withdrawal. He is unable to connect with any human and no human makes any emotional connection with us.

As a study of current media crises, the film is not quite so successful. Gyllenhaal’s incarnation of a post-Scorsese existential loon – more Rupert Pupkin than Travis Bickle – is never less than unsettling. But to make the photographer a genuine psychopath is to lessen the satirical punch. It would be frightening to think that all the paparazzi, ambulance chasers and funeral stalkers were crazy. The realisation that, for the most part, they’re quite sane is scarier still.