Catherine Walker: the best Irish actress you never heard of? 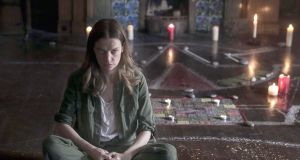 Catherine Walker starring in the horror film A Dark Song

A little less than 20 years ago, Catherine Walker did what so many of us then did and lunged for London. Raised in Coolock, she had knocked up a few promising credits after graduating from the Gaiety School of Acting, but the move still felt like a significant risk. Then again, at that age, we feel we can accomplish anything.

“I got a show in the Tricycle in London. So that was that,” she says. “I was terrified. But I do that sort of thing when I am terrified. I just jump off the mountain. But we were all being packed away then. You know what I mean?”

Walker overcame inevitable trials to construct one of the most intriguing CVs in contemporary Irish entertainment. Her face is not as familiar as that of Ms Ronan or Mr Farrell. But theatre watchers speak Walker’s name with awe.

An early spell at the Royal Shakespeare Company offered invaluable grounding. She has appeared in The Clinic and Holby City. But it was on stage that she made her mark. She has triumphed as Phaedra, Miss Julie, Hedda Gabler and Cordelia. Two years ago she played Stella in A Streetcar Named Desire at the Gate. Phew!

“I suppose I do see myself as a theatre actor,” she says with a hint of uneasiness. “Film and TV came later. But I hate that separation. One is vital for the other. One really feeds the other.

“There is something about going on that theatre journey that is very different. You are on your own. With film or TV, when it’s on afterwards, you’re not connected to it. You feel a bit of loss for the characters.”

Walker has an expressive, flexible face, but it is the voice that really strikes you. There is a brittleness to it that responds usefully to the pressure of high emotion. She gets many opportunities to exploit that with her role as a widowed mother in Liam Gavin’s fascinating horror film A Dark Song. Steve Oram plays an occultist who, while secluded in a remote mansion, talks her character through a necromancy ritual.

“I wish I was one of those actors who can just switch it on, but I’m not,” she says. “My way into the character was staying with the grief. It’s grief that is solidified. She can’t let go of it. I carried that with me. And that was a weight. She won’t even let herself cry.”

Walker is clearly somebody who invests a lot of emotion in every performance. It comes as no great surprise to learn that she has been committed to the profession from an early age. She went to speech and drama classes. She enjoyed the theatre. The virus was unshakable.

“I didn’t do any child acting,” she says. “But it was a sort of given that I was going to do that. My mother had a great love of theatre. I coasted my way through school knowing that’s what I wanted to do and I regret that now. I do occasionally think: I wish I had that degree.”

Did she become a dosser at school?

She appears to have lived a fecund life during the English years. Walker laughs as she recalls crying when first arriving at the Swan Theatre in Stratford-upon-Avon. Her time at the RSC seems to have been deliciously exciting.

“It was incredible, but there was a period of unemployment after that,” she says. “I had about a year. Interestingly, so did a lot of the actors who were with me. Maybe that was the start of theatre actors not being quite trusted with film and TV. I didn’t know what I was going to do.”

By then she was married. For a few years, around the turn of the century, Catherine and her then husband lived an apparently cosy life in Brighton. That’s where all the actors rest these days. If things had happened differently, she may have been lost to the homeland.

“I met my husband at my second season at Stratford,” she says. “And we got married in the holidays from that. So it was a short courtship. When we got back from that, I felt that I had to get back to the sea. It was a sea thing. Some of my closest friends are still from that time.”

She subsequently divorced and now lives in a fashionable quarter of Dublin 8. Or does she? Such are the demands of the business that Walker finds herself forever reaching for the suitcase and the travel adapter. She is about to head for Europe to shoot the third season of the lavish costume drama Versailles.

“Dublin is very important to me,” she says.

Yet she’ll be shooting until November

There are many, many worse things.