French film festival shows no signs of being Cannes’d 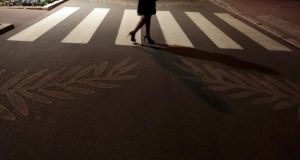 The streets of Cannes were, yesterday afternoon, buzzing with a proper grown-up news story when it emerged that $1 million worth of jewels had been robbed from a room in the Novotel Hotel. Photograph: Eric Gaillard/Reuters

The streets of Cannes were, yesterday afternoon, buzzing with a proper grown-up news story when it emerged that $1 million worth of jewels had been robbed from a room in the Novotel Hotel. The gemstones were the possession of the Chopard company, which designs the Palme d’Or Award, presented for the best film in the official competition. They were set to be loaned to stars for their journey down the red carpet. Police told the Hollywood Reporter that an entire safe had been removed from a wall in the Chopard employee’s room. Hotel employees are being questioned.

A busy opening bout has dispelled any notion that the Cannes Film Festival would wilt in the heat of recession. Leonardo DiCaprio was in town for the opening of The Great Gatsby on Wednesday.

Emma Watson, alumna of Harry Potter, turned up on Thursday to talk about her appearance in Sofia Coppola’s The Bling Ring. That film finds the former Hermione playing an empty-headed LA teenager involved in the burglary of several celebrities’ mansions. “Harry Potter feels like such a long time ago,” she said at a hectic press conference. “So much has happened in the last three or four years, but obviously it’s still very present, it’s still being played in people’s living rooms. I’m not trying to run away from it.”

Elsewhere. Justin Timberlake, pop star and actor, attended a party to celebrate his upcoming participation in a biopic of Neil Bogart, founder of record label Casablanca. The film is unlikely to hit screens for at least another year. But such is Timberlake’s fame that the event still managed to kick up a furore of media attention. “You hear a lot of actors talk about ‘becoming the character,’ but in this role I really feel the right approach is bringing myself to the character,” he said of Bogart, a key progenitor of the disco movement. “I just have so much in common with Neil and feel that I have so much of me that is Neil.” Later today, Justin will attend the premiere of the Coen brothers’ Inside Llewyn Davis, which finds him playing a 1960s folk singer.

The other big news on the Croisette concerned Scarlett Johansson. It has been confirmed that the actor is to make her directorial debut with an adaptation of Truman Capote’s posthumously published novel Summer Crossing. Her producers are currently scouring the Cannes market for potential producers.

With all this chatter going on, it would be easy to forget that a major film competition is taking place. There have been no great critical smashes so far. Young and Beautiful, the latest from François Ozon, was met with tolerant shrugs. Jia Zhangke’s A Touch of Sin painted a grim picture of contemporary China. Amat Escalante’s Heli offered even worse news from contemporary Mexico.

An early favourite for the Palme d’Or, the festival’s top prize, did, however, emerge yesterday with the unveiling of the latest film from Asghar Farhadi. The Iranian director’s previous movie, A Separation, garnered skip-loads of praise in 2011, before going on to win the Academy Award for best foreign language picture. There were some dissenters, but most reviewers felt certain the picture will figure when the awards are announced on May 25th.