It looks like a three-horse race led by Todd Haynes’s ‘Carol’, starring Cate Blanchett, and László Nemes’s ‘Son of Saul’. Could Hou Hsiao-Hsien’s stunningly beautiful ‘The Assassin’ sneak through to win? 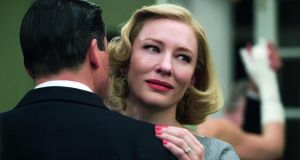 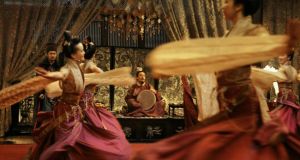 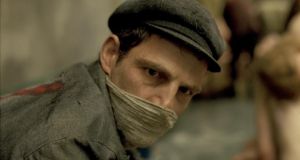 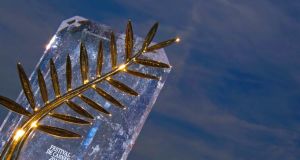 Such is the nature of the news cycle that some editions of the Cannes film festival come to be identified with satellite scandals only obliquely related to what has been happening on screen. The 1968 event was the one at which the nouvelle-vague mob shut the event down. The 2011 festival was the one where Lars von Trier compared himself to Hitler. And 2015? Alas, beyond the arts pages the 68th festival will be forever associated with certain unfortunate women being denied access to a red-carpet screening because they weren’t wearing high heels.

But a fine array of films has emerged across this busy Mediterranean resort. It is shameful that such closing reports, like the work of racing tipsters, focus on what may or may not win the Palme d’Or. So, before doing just that, we’ll mention a film playing up the Croisette in the Directors’ Fortnight. Fans of Jeremy Saulnier’s Blue Ruin will be delighted to hear that the director’s follow-up, Green Room, exceeds the promise of that excellent revenge thriller. Concerning a siege between the members of a punk band and neo-Nazis in the rural US, the picture manages a near-perfect blend of black humour and rampaging tension. John Carpenter would be proud of it.

Among the films playing out of competition we hugely enjoyed Inside Out, a return to form for Pixar Animation, and Amy, Asif Kapadia’s searing study of Amy Winehouse, but the midnight screening of Gaspar Noé’s infuriating Love managed to kick up most of the gossip in the second week. The incorrigible director of Irreversible and Enter the Void has featured graphic sex in his films before. Here, however, the unsimulated rutting managed to (ahem) engorge a diverting trifle into an epic of indulgence. The story of an awful American ruining the lives of marginally less awful Frenchwomen, Love shows that Noé’s skills as a visual experimenter remain sharp – the images shift despite the camera remaining stationery – but two hours and 20 minutes is a long time to spend with such tedious people. The sex looks as sex does between attractive young people. There is quite enough of it to go around.

The Un Certain Regard section has been the official alternative to the competition for some years. In 2015 we didn’t see too many standout pictures, but mention should be made of Apichatpong Weerasethakul’s Cemetery of Splendour. The selection meant that, somewhat unusually, a former Palme d’Or winner is competing in the sidebar. The Thai director proves once again that there is nobody quite so magnificent at blending evocative reverie with sideswiping oddness. Although less unhinged than his previous work, Cemetery of Splendour stands out as a work of mighty distinction.

That film would certainly sit very comfortably in the Official Selection. Many formidable movies are competing for the Palme d’Or, but there are also more duds than is usually the case. The least said about Gus Van Sant’s already notorious The Sea of Trees, the soonest mended. Valérie Donzelli’s ludicrous Marguerite & Julien, a French period drama with arch stylings, is only marginally superior.

Indeed, the disproportionately large cadre of French films have not done the home nation great credit. Maïwenn’s Mon Roi is a so-so tale of fiery romance between Emmanuelle Bercot and Vincent Cassel. Jacques Audiard’s Dheepan, a creditable study of Sri Lankan immigrants to Paris, is not up to the standards of his work in A Prophet and Rust and Bone. Although Guillaume Nicloux’s Valley of Love brings Gérard Depardieu and Isabelle Huppert together to amusing middlebrow effect, this seems awfully slight for the main competition

Enough griping. Let us get down to the cheapening predictions for the Palme d’Or, surely the second-biggest prize in film after the Oscar. Listen to no person who tries to predict the result on the makeup of the jury. By this pundit’s reckoning you have to go back to 2000, when eccentric Luc Besson’s panel gave the prize to Von Trier’s eccentric Dancer in the Dark, to see firm indications of a jury president swinging the result. Might Joel and Ethan Coen, this year’s joint chiefs, be uneasy about awarding the gong to their contemporary and compatriot Todd Haynes, for Carol? We don’t buy it.

At the time of writing Paddy Power has Yorgos Lanthimos’s terrific The Lobster, a hysterical absurdist comedy filmed in Kerry and Dublin, as the favourite, at 5/2. It’s nice of them to show such confidence in the home team, but the Irish coproduction – featuring Colin Farrell in fine form – should really be offered as a decent outside bet.

The same could be said of the Audiard film, Paolo Sorrentino’s divisive Youth – much weaker than his beloved The Great Beauty – and Nanni Moretti’s solid My Mother. The only film we hadn’t seen at press time (check online for our take this afternoon) is Justin Kurzel’s Macbeth, but, although Michael Fassbender could figure in the race for best actor, the up-and-coming Australian director will be doing well to register with the jury.

The penultimate film in the competition, Michel Franco’s Chronic, may have ruined its chances with a baffling final scene. To that point the picture has been a controlled, deliberately oblique study of a palliative-care nurse who gets too close to his patients. Offered his best role in years, Tim Roth is a contender for best actor. We’ll hint no more about that last shot.

This year’s Palme d’Or looks very much like a three-horse race. Two early contenders still look to be neck and neck. Haynes’s gorgeous, clever Carol, starring Cate Blanchett and Rooney Mara as romantically entangled opposites in Eisenhower’s United States, has received as strong reviews as any recent Cannes entry. The director of Safe, Far from Heaven and I’m Not There, a founding figure of the new queer cinema in the early 1990s, is a much liked personality who slams the button marked “overdue”.

By way of contrast László Nemes has an excellent shot at becoming the first debut director to win a Palme d’Or since Steven Soderbergh, in 1989. Nemes’s Son of Saul is the poundingly powerful tale of an Auschwitz prisoner trying to arrange a decent burial for his son as the Allied forces advance and a camp uprising looms. Nemes certainly looks to be bringing the Caméra d’Or, awarded to best first film, back to his home in Hungary.

What often happens in such tight situations is that a compromise candidate sneaks through the middle. This year that film looks to be Hou Hsiao-Hsien’s stunningly beautiful The Assassin. The Taiwanese director, now 68, is among the most celebrated Asian film-makers of the age and, like Haynes, is seen as sufficiently distinguished to deserve the Palme. Based on a tale from the Tang dynasty, the film does not race to its conclusion, but its staggering images have sent the Cannes masses into rapturous vapours.

All will be revealed by host Lambert Wilson at the Palais des Festivals et des Congrès early on Sunday evening. One thing is certain. After the current hullabaloo no lady will be turned away for the flatness of her shoes.