A Field in England 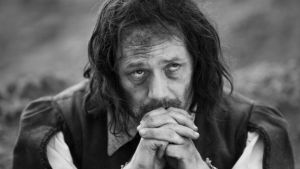 Reece Shearsmith in A Field in England

Film Title: A Field in England

Enthusiasts for the great British tradition of folk horror may – troubled by agitations in their yellow humour – require a dose of physick after full immersion in Ben Wheatley’s extraordinary follow-up to Kill List and Sightseers. The director has demonstrated, in those fine films, an awareness of the dark, fetid things that squat behind English hedgerows. Poor phone coverage is the least of your worries when you venture beyond the comfort of city boundaries.

Shot on a tiny budget, A Field in England moves still deeper into the wilderness. Set during the English Civil War, featuring alchemists, buried treasure and very bad teeth, the film will remind (and is surely intended to remind) folk-horror aficionados of period classics such as Witchfinder General and Blood on Satan’s Claw. But Wheatley’s latest is considerably more obtuse than even those odd films. Seeping up Laurie Rose’s crisp monochrome shots of gnarled wanderers, the tolerant viewer may allow vaulting comparisons with Ingmar Bergman’s The Seventh Seal.

Before getting too concerned with what A Field in England is like, we should make some attempt to describe what it is about. No easy task. The picture begins with a skirmish in knotty foliage that ultimately casts Whitehead (Reece Shearsmith of The League of Gentlemen), assistant to a Norfolk alchemist, into the company of three equally battered, less thoughtful ex-combatants.

All equally uninterested in the battle between parliament and king (indeed, their original affiliations are obscure throughout), the four men decide to set off for an alehouse just over the next hill.

Official Trailer for 'A Field In England'

Somehow or other, however, they find themselves hauling on a rope connected – not, perhaps, physically – to a sinister Irishman (Michael Smiley) who reigns over a field surrounded by a variety of mushrooms. “It does not surprise me that the devil is an Irishman, though I thought perhaps he might be a bit taller,” somebody says of this O’Neil.

Sinister and blackly hilarious in Kill List, the excellent Smiley (a Belfast man with a Belfast man’s angular delivery) does indeed bring a whiff of brimstone to his performance. Following a series of verbal jousts with the gang, O’Neil lures Whitehead into his tent and causes him to emit a profoundly worrying series of deathly screams. When Whitehead emerges – offering one the great images in macabre cinema – he has been transformed into a possessed, insanely grimacing version of the hitherto civilised natural scientist. No special effect could be so alarming.

Amy Jump, Wheatley’s wife and longtime collaborator, has written a mischievous, demanding script that contains not the slightest glimpse of a female character. “What this party lacks is the civilising influence of women,” one of the refugees remarks.

At times such as this, one begins to suspect that the whole film is a class of sophisticated joke: the authentic period detail clashing with self-conscious apology and filthy-yokel visual hyperbole. Well, A Field in England is certainly funny. A vaguely avant- garde device that asks the characters to pose in tableau vivant is undermined when we realise that Whitehead is, during one such static arrangement, examining the sores on a companion’s unlovely penis.

But Jump and Wheatley always manage to give the impression that, hidden within all this absurd confusion, some sort of awful solution is lurking just out of reach. It’s a very hard trick to pull off. Like last year’s magnificent Berberian Sound Studio, the picture sets out puzzles that will baffle enthusiasts for decades to come. There is something here about the coming of reason in Restoration England. There’s a farewell to the pagan world. Then again, there’s also a suggestion that the madness is all down to those funny mushrooms.

One thing is, however, established beyond any reasonable doubt. Mr and Mrs Wheatley are among the most original, most peculiar, most captivating film-makers working anywhere in the world today. And A Field in England is the only one of this week’s releases that you absolutely must see.