A Cambodian Spring: Magic trick of a movie

Review: There’s no easy way to summarise this documentary. But it’s well worth seeing 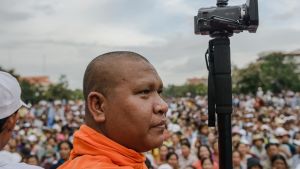 'A Cambodian Spring', against the odds, justifies its place on the big screen

Chris Kelly has an interesting tale to tell in this singular documentary. Filmed over six long years in Cambodia, the picture kicks up questions about property rights, the purpose of protest and routes out of tyranny. You will learn plenty.

Comprising endless interlocked conversations, occasionally interrupted by inter-titles, the film demands concentration from the viewer. But Kelly never forgets that he’s working in a visual medium.

Every now and then, a striking image will knock you back on your heels. Bulldozers disenfranchising the poor while lightning illuminates the clouds over Boeung Kak Lake. A disembowelled house shows its sad innards to the camera. Scored to electronic drones and the odd beat by James Holden, A Cambodian Spring, against the odds, justifies its place on the big screen.

No pat summary is easy (another reason why the picture is worth seeing in the cinema). We focus on three people who became involved in a series of protests – based mainly around land ownership – that some have dubbed the “Cambodian Spring”.

Venerable Sovath, a Buddhist monk, speaks eloquently and persuasively about his wider social responsibilities and why he can’t “stay in the pagoda”. Toul Srey Pov and Tep Vanny make the case for displaced citizens. “The rich people always break the law,” one says. A whole world nods along.

We begin with (and return to) the citizens flattened by developments around Boeung Kak in Phnom Penh. The inter-title talks us through the appointment of Hun Sen as prime minister following the collapse of the murderous Khmer Rouge regime over 30 years ago. Once a part of that movement, Hun Sen, still in power, is now the world’s longest serving prime minister. No good comes from such dominance. The picture touches on the connections between the government and the company that came to lease the land. Criminal collectivism leads on to criminal capitalism.

A Cambodian Spring does have its longueurs. But, weaving together complex material into a coherent narrative, it emerges as a sort of magic trick. A unique story. But also one that is too common and too universal.

Patrick Kielty: ‘We weren’t sure how many people would turn up – 400 queued around the corner’
6